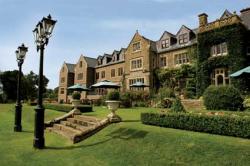 I have a soft spot for country house hotels, one fuelled by being glued to Downton Abbey every Sunday. Yes I know it’s only Upstairs Downstairs for 2000 but I like to sigh wistfully and imagine what I would do in the Earl of Grantham’s brogues faced with all his posh problems.

One of them, not mentioned, must be the fact that’s he’s trying to run a house the size of Kent with apparently no more than twelve indoor staff. We never see the poor man who has to run the Flymo over the hundreds of acres outside, presumably he is confined to a small hut.

Turning into the drive of South Lodge Hotel from the old Brighton Road, you get the sweep of driveway and suddenly the view of the house itself. Massively enlarged since being turned into a hotel it has been done with sympathy and only the newness of the bricks really gives away where new wings have been grafted on. 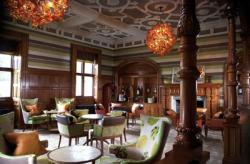 This means my head movie, where I am greeted by genuflecting loyal staff, is retained all the way up to the front desk. They have built a whole new reception area in front of what was once the original front door, which is a bit odd, but it works if you don’t wonder why there are exterior windows between internal rooms. It has a big old fireplace and must be particularly welcoming in winter.

The house was originally enlarged by Frederick Du Cane Godman back in 1883, a man with links to the Whitbread brewery fortunes. Now run by Exclusive Hotels Collection the hotel retains much of what he would have been familiar with, the main downstairs rooms easy to imagine as the library, drawing rooms, estate offices they once were. In fact the family only sold up in 1982, so the move from private to public is only relatively recent. 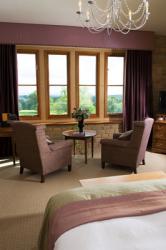 We stayed in one of the modern wings, in a vast room comfortably kitted out with plenty of luxury touches. The bathroom was equally large with a walk in shower area that squirted from all directions in a fun and efficient way. Double aspect windows, an enormous bed that almost required a ladder to get on to, a large smart telly that, as usual, was a mystery to power up and Bose sound system, all added to the feel, along with crisp magazines dotted about.

We got a bit lost on the way to The Pass, the fine dining room, and feared we might wander the corridors forever, until we were put right by one of the friendly Eastern European staff that are around every corner. No servant problem these days, not since the Wall came down.

The Pass has just earned a Michelin Star for head chef Matt Gillan and is an achingly modern room done out in lime green. Its name comes from the fact that is almost in the kitchen, but separate so you can get a good view of the team at work.

We went because it was a night of chefs – Matt had invited a mix of established chefs as well as aspirants to cook an All Stars Dinner – a nine course meal with a different group on each of three nights. A very nice idea and one which worked well as the relatively small room soon became a group event with tables chatting to each other. 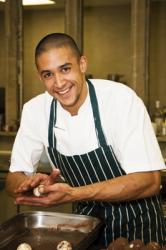 Matt gave a confident introductory speech and then we were off, with each of the nine chefs introducing their dish to the room. Nine dishes are rather too many to describe here, but each was very interesting, some were inspired and one, the veal tongue, I never want to eat again. Matched with some fine wines, also well introduced, it was a meal that was well worth the very reasonable price.

The next day, after a full English in the breakfast room, I indulged once again in fantasies of butlers and chambermaids before wandering from room to room in a proprietorial way and then out on to the lawn with its fine views over onto the Downs. The hotel has bikes for hire so you can pedal down to the lake or just circuit the grounds. I went to admire the wonderful walled kitchen garden but golf is nearby for those who like to swish a niblick or two.

One of a boutique group of converted country houses, South Lodge is so near London and Gatwick that a short break or even one night is easy to achieve. The hotel is always putting on special events, some around food and some around other unique evenings. If you have a taste for tradition and a love of classic English service and style, then South Lodge is dream into reality.