If I could live my life differently I would make cheese. Without knowing the implications I imagined that the only thing stopping me was living in a top floor flat with nowhere to keep goats (which I assumed would be more realistic route to creating this most wonderful foodstuff in leafy but far from rural west London). My fantasy didn’t include sitting on a stool next to a tin pail milking the goats – and particularly not if it meant getting up early seven days a week – but I was sure I would find a way round the inconvenient practicalities. Stirring, moulding and, best of all, tasting then wrapping and proudly presenting others with my (inevitably) award-winning cheese … it all seemed so easy in my dreamlike world.

I didn’t have to get up early the day I visited Butlers Farm at Inglewhite, near Preston in Lancashire. Someone else had milked the cows and goats – also part of my plan – so all I had to do was leave my London-life trappings in the Butler family farmhouse and walk (through a stiff and biting wind) a few yards to the cheese-making area of the dairy. Then it was off with all our jewellery (watches, rings, even the tiny never-been-off-before gold necklace I’ve worn since my 18th birthday) and on with the tour to learn how Asda’s Extra Special Creamy Lancashire is made.

Entering the cheese-making equivalent of a sterile area, we sat on a stainless steel ledge while taking off our shoes, swung our legs over and round then slid our feet into disinfected gumboots, our bodies into white coats and our hair into blue hairnets. My notepad was swooshed with a sanitising wipe; I was given a pen, similarly cleaned, that never leaves the area and then I remembered buying a slab of cheese from my local farmers’ market and being horrified, a few hours later, when I cut off a chunk and … pulled out a very long, dark hair. I never bought cheese from that stall again. Any vain thoughts I had about wearing an unflattering hairnet were gone; bearded men wear something similar over their facial hair, too; nothing that might affect quality, or Butlers’ and Asda’s reputations, can be left to chance.

Butler’s cheeses are all made by hand using pasteurised milk (pasteurisation ensures consistency of the standards expected by supermarkets) which is the modern equivalent of yesteryear’s tradition of leaving the milk to warm up in the kitchen. The next step is to add a starter culture and this is where cheese makers experiment, finding the right blend for the taste they want to achieve. It’s all customer-led, of course, and our preference is increasingly for sweetness. Lactobacillus helveticus, a lactic acid producing bacterium, does that job. Salt is added to control the speed at which the culture works – a relatively slow 24 hours for Lancashire, a softer cheese. Rennet sets the milk; Butlers uses microbial (not animal) rennet.

Paddling through the curds

The mixture is then cut into small pieces and stirred – again, this is done by hand – using long paddles, sweeping them back and forth, side to side and up and down, the stirrers moving from vat to vat down the row then starting all over again, in a painting the Forth Bridge style operation. No need to go to the gym to get rid of bingo wings, I thought, adding another benefit of cheese-making at home. At this stage, depending on the cheese being made, heat might be added to cook the curd and reduce moisture, leading to a drier cheese. 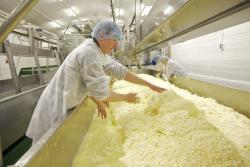 Separating the curds from the whey came next, the curds being given a turn (also by hand) every now and then. It looked like a massive tray of hotel-style scrambled egg – small curds, creamy yellow in colour with a soft, mild flavour and a slightly rubbery texture. Tasting is compulsory at this stage. More salt is sprinkled on, then mixed in well, to speed the process though, as this is a soft Lancashire cheese, this stage lasts an extra day.

It takes 10,000 litres of milk to make one ton of cheese. A massive 85 per cent to 90 per cent goes in whey (Butlers send it to pig farmers as feed; larger dairies turn it into whey protein, a food supplement). A good yielding cow produces 25 litres a day. Butlers has 270 cows. My one goat in the garden idea might not be so viable, I thought sadly. 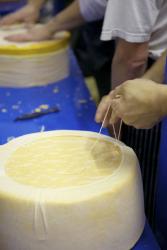 The eggy-looking curds are then pressed overnight into moulds – some round, some rectangular, depending on customer preferences – left for a day in a cloth binder (a bit like a tubi-grip) before being left to mature. Butlers matures its cheeses for longer than most dairies, starting them off in a very cold room for the first month before transferring them to shelves so well-packed it felt like a well-stocked cheese library.

Nice work if you can get it

Moving along the stacks of shelves was Butlers’ cheese grader, Bill Yates. He tastes cheese every day – at least 30 irons (as the steel prodder he uses is called) of each type of cheese a day and, yes, his cholesterol level is ok. Having joined Butlers 22 years ago as a cheese-maker, his role now is to analyse what’s going on with each batch of cheese. 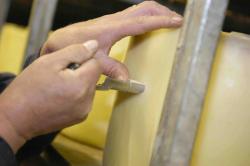 He pushed in the iron then drew out a cigar-shaped cylinder of cheese. Each time, he moved the iron to his nose, turned it over to check the back, drew out a centimetre or so of cheese, squeezed it between his fingers, gave it another sniff – all the time looking at the cheese – then tasted. It happened seamlessly, instinctively, inquisitively, assuredly, keenly. I watched, wanting his job. I still do.

And then it was our turn to taste – and I discovered that the descriptions for Lancashire, which have always left me rather foxed, mean much more than the simple words imply:

Even more complex is the fact that each category of Lancashire cheese differs from retailer to retailer. Crumbly Lancashire will always have the same overall qualities but each supermarket has its own preferences for how crumbly, salty or lemony it is. The same goes for the others. There’s a continuous dialogue, with the supermarket frequently testing what’s on the shelves and feeding back comments between deliveries. The job of cheese grader is far more complex than pushing in an iron and having a sniff and a taste. But I still want his job.

A challenge for supermarkets – and us 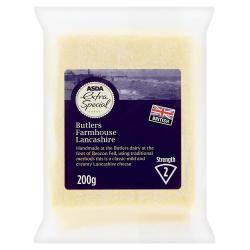 The story of Butlers Farm goes back four generations to the 1930s when hand-making cheese was done to bring in income to buy feed for the cows. Asda was Butlers’ first big customer, anticipating a demand for hand-made artisan cheeses, pioneering what all supermarkets now do. Their next challenge, according to Gillian Hall (a Butler granddaughter and managing director of the business), is to emphasise the difference between their cheeses – showing off the artisan cheeses, separating them more strikingly from the mass-produced factory-made cheeses they currently sit next to.

Butlers has won 82 awards this year. Asda’s cheeses consistently win awards and this year triumphed at the International Cheese Awards at Nantwich, our most prestigious cheese show, taking home 11 gold medals and bringing its total to 73 awards this year. If you usually reach for the same slab of cheese every time you shop, surely Christmas is the time you should let your eye wander along the whole length of the supermarket cheese selection, looking and thinking differently?

How to eat Lancashire cheese 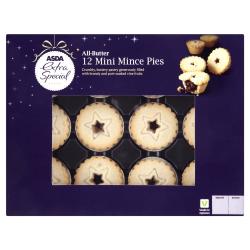 Asda’s Extra Special Creamy Lancashire, handmade at Butlers Farm, is not just for eating with cheese biscuits. It’s a great partner with mince pies; it’s even better with an apple pie. It melts in a little milk into a creamy sauce (no need to make a roux, or even to grate the cheese – just pour the milk over it and heat it gently in a saucepan or microwave). And, as any cheese fanatic will tell you, its wonderful eaten entirely on its own allowing small chunks to warm up on the tongue, dissolving naturally while releasing the full extent of its crumbly-creamy, slightly salty, lightly lemony cheesiness. So now I want several cows for Christmas. And Bill’s job.