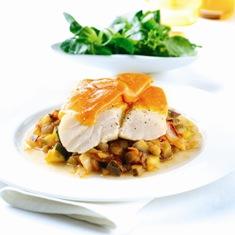 British Cheese Week runs from this Sunday until the 4th October and what better way to mark this than enjoy some lovely cheesy meals!The British Cheese Board website, www.britishcheese.co, has a vault of delicious cheese recipes, from starters, snacks, mains and puddings, to lower fat cheese recipes, as well as a range of cheese pairings that includes cheese and wine, cheese and whisky and even the more unusual pairing of cheese and beer.

For instance, why not try the delicious Sea Bass with Red Leicester or the Farmhouse Cheddar Linguine the recipes for which you can find on our recipe pages. For other recipe ideas visit the British Cheese Board site through the link above.

Head chef Tom Hempstead (Papillon), working with fromagerie Todd Bridge (La Cave a Fromage), have created the menu that takes diners on a tour of some country’s finest cheese offerings.

The menu, priced at £48 per head, will be available at Papillon throughout British Cheese Week (26 September-4 October)

Gratin of smoked haddock with Isle of Avalon

Isle of Avalon is a washed rind cheese from James AldridgeÃ‚’s farm in Godstone, Surrey

Selection of British cheeses with walnut and raisin bread

Cerney cheese is produced in Cirencester; it is a very young,

soft and creamy cheese with floral and citrus flavours