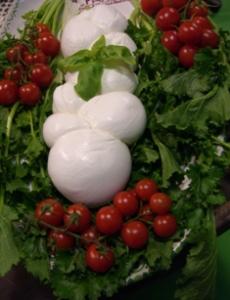 Imagine if you will a Eurovision Song Contest from the 1960’s, and for those of you who are old enough, just cast your minds back to Katie Boyle struggling with broken links yet keeping a smile on her face and ever with a pleasant greeting to the judges from across the continent when asking them for their scores. With that image in mind, you come close to picturing what it was like when some 26 countries across Europe came together – or at least tried to – to discuss and celebrate European day of Mozzarella di Bufala Campana PDO (Protected Designation of Origin) through the wonders of the World Wide Web.

This event was conducted predominantly in Italian, so the likes of me, who don’t speak the language and did not have the relevant i-Phone technology were reliant on simultaneous translation into our headsets. Regrettably, the volume from the loudspeakers in the room where the conversations were relayed mainly in Italian and the constant whining feedback in the headphones, made this a rather unpleasant experience. So, once it had become clear that much of this international conversation between our Euro-cousins was quite repetitive – ‘And how is the Mozzarella market in…..?’ with a somewhat faltering delivery and response, I decided to give up on the translator and just watch, amused by the spectacle.

Indeed it was quite amusing, but in essence the message was clear. This day, 24th February, had been augustly designated as European day of Mozzarrella di Bufala Campana PDO. Its significance is to recognise and protect the provenance of this white soft cheese made from Buffalo milk in the Campania region of Italy. Some interesting facts came to light like, Buffalo Mozzarella is made only from fresh milk on the day of milking and that it is at its best when eaten within three days of being made. This, inevitably, makes distribution and getting it from producer to consumer’s plate very difficult if we are to taste it at its best. We were also told about an i-Phone application where you can photograph the barcode on the packaging and send it to given number, from which you get an almost immediate response as to its provenance. There were other issues being discussed, such as food safety and packaging, but much, if not all of this was lost to me in translation or feedback. All this was a forerunner to the real reason for our being there, at least, in my view it was. To taste the fresh produce itself with wines paired by none other than my colleague in the foodepedia stable, Douglas Blyde.

Douglas had given a short talk during the morning about the pairing of wines with this cheese, mentioning his i-Phone application that can be downloaded free though toptable. And for the Buffalo Mozzarella he recommended – and chose for us – a very nice Jeio Prosecco, which I was quite taken with. On to the main focus of the morning, the Mozzarella. Plates laden with the cheese were set out on tables in a reception room of the Italian Chamber of Commerce in Belgrave Square. The cheeses came in three boule shaped sizes, there was also some that were plaited. This mild cheese had a dryish flavour in the mouth and remarkably, given that it had only been made the previous day, an interesting firm texture, with a kind of stringy grain to it that is very nice. I also tasted a small amount of the smoked variety, similarly textured, the smoking added a different dimension to the cheese which I liked.

If you are looking for the real thing, Buffalo Mozzarella from Campania can be sourced fresh from a few outlets in London, notably Harrods food hall and Partridges in Sloane Square. It is something I would recommend tasting, but of course, you should keep in mind, that to eat it at its best, it should be consumed within three days of production, so get it when you are likely to eat it is the message.