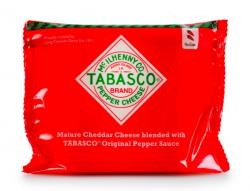 Food bloggers, and some longer-established food writers, were swift to condemn Alex James when he launched a range of flavoured cheeses for ASDA last year. Those barely out of short trousers took the snobby angle Ã¢â‚¬â€œ missing the point that, as I saw it, these cheeses were developed to appeal to kids still in short trousers and with undeveloped palates. The more sophisticated among the critics condemned Alex James for collaborating with a supermarket.

I’m a deli-girl to the core and passionate about supporting local independent shops, producers and growers but it’s easy for me, living 500 yards from a greengrocer, fishmonger, butcher, deli, chocolatier (and a few fantastic and affordable independent restaurants with interesting cheese boards) in leafy west London (Chiswick, to be precise). Most people have had these rights (to choose where to buy) stripped from them, their only choice being which supermarket where paying more, believing they are paying less, for blandness and disappointment is easier than being discerning.

I’m also a cheese fanatic and, against all health advice, eat it every day. I always buy it from my local deli (Mortimer & Bennett, since you ask, and no I don’t work for them) which has a huge variety of artisanal English and European cheeses. Including, when it’s in season, Alex James’s extraordinarily good Little Wallop. 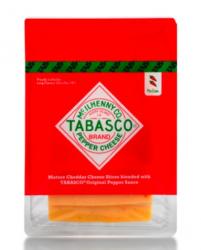 I seldom pick mixed-up cheeses Ã¢â‚¬â€œ combinations that make no sense to me Ã¢â‚¬â€œ but regret not trying Alex James’s mixtures to check whether the bloggers had a point. They did and they didn’t, it seems. Production of six of the nine flavours has been stopped (including ketchup, salad cream and tikka masala) but sweet chilli and spring onion are still being made and there’s apparently another flavour on its way. He and Asda weren’t wholly wrong, then.

Even so, it’s brave of Tabasco® and Long Clawson dairy to collaborate with Tesco to produce Tabasco Pepper Cheese, a sample of which arrived this morning just in time for breakfast.

Is there any cooking household (or bloody Mary drinking household) that doesn’t have a bottle of the US-family-run McIlhenny Co’s fiery sauce in their larder? I can’t think of a time when the little red-octagonal-capped bottle hasn’t been in my kitchen, an edible (and drinkable) comfort blanket guaranteed to pep-up the dreariest of tasteless cooking disasters with a blast of spice. And who doesn’t reach for cheddar as a passing snack or to grate into sauces on cold winter evenings, even if your fridge has as wide a range of cheeses on the go as mine (including, when I can’t get to my deli, family-firm Long Clawson’s excellent stilton; their paneer is good, too)?

But I did worry that it would be horribly weird, a peculiar coupling crying out for an instant, quickie divorce. 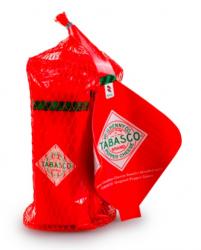 Out came the scissors, snipping through the green Tabasco®-branded strip at one end of the bright red pouch, one of five 30g snack-size portions bagged together (it’s available in wedges and slices, too). I jiggled the cheese out an inch and noticed I was already salivating. Almost as swiftly, my nose tingled as it always does when detecting a whiff of peppery Tabasco®. I bit into the chunk, more than pleased so far. My tastebuds woke up, the whole of my tongue responding to the different tastes within this palate-satisfying chunk: sweet and bitter from the peppers; salt from the cheese; sour from the vinegar that goes into the Tabasco® brew; and umami thanks to the fermenting process that adds to Tabasco’s zing.

The complex mix of flavours is long-lasting and wholly taste-fulfilling Ã¢â‚¬â€œ which is what makes good food satisfying, and why cheap one-dimensional food leaves you hungry for more (but not of the same). Mixing Tabasco® with cheddar could generate high-handed criticism from food snobs wanting some band-wagon publicity Ã¢â‚¬â€œ but not from me. I’ve eaten three portions already (well, there was lunch too).

Try it in this easy-to-make chicken and chorizo cheese jambalaya.