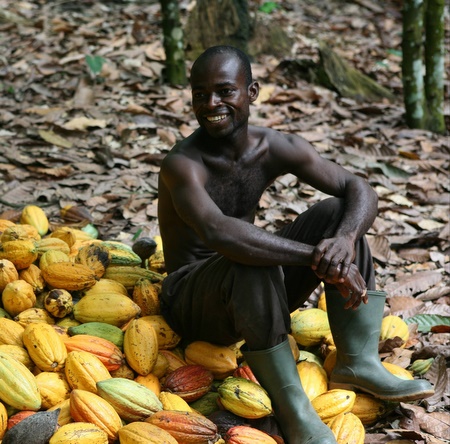 The “Decade of Divine” tour is travelling across the UK with two Kuapa Kokoo farmers’ during Fairtrade Fortnight 2009 (23rd February – 8th March) The tour will help celebrate a decade of change and improvement in the lives of cocoa farmers in Ghana. Mr Zaah from Dadiefo in the Western Region and Mr Berko from Kokofu in the Bekwai Area of Ghana will be visiting London, the West Country, Newcastle and the North East. The tour will coincide with a photographic exhibition of stunning images of the Kuapa Kokoo cooperative. There will many opportunities to sample delicious Divine chocolate along the way.

Divine Chocolate and the two Kuapa farmers will be attending a variety of public and private events and talking to schoolchildren, shoppers and retailers, church groups and local businesses, government officials and Fairtrade steering committees. They will be telling their story of how Fairtrade, and owning a chocolate company, has transformed their lives over the past decade – and in turn they’ll be learning how much we love chocolate here in the UK!

Over the two hundred years since the chocolate industry’s beginnings, chocolate has become a multi-billion pound global business which has bowed to the voracious demands of shareholders. But Divine opened their business to prove that the chocolate industry doesn’t have to be this way. Divine Chocolate was born when a co-operative of farmers in Ghana set up their own company in the UK. Today Divine has a turnover of £12 million and is a multi award-winning example of an equitable trading relationship with smallholder farmers in Africa.

Each year the opportunity to meet, talk with, and hear the stories of cocoa farmers firsthanad has had a profound impact on thousands of people nationwide. It is these encounters that really bring home the significant impact Fairtrade can have and the power we have as consumers to really make change happen. Fairtrade Fortnight has played an important part in Divine’s growth and popularity over the years – as people have chosen the chocolate that gives them this closer connection with farmers in the developing world.

Full details of events can be found at www.divinechocolate.com