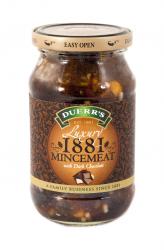 Apparently mincemeat, the sweet kind, is a bit of a Marmite food. Only this year I’ve found people seem to either love it or hate it. Personally, I’d be happy to bathe in the stuff. So when the lovely people at Duerr’s offered to send me some of their festive flavours to try out I jumped at the chance. I think it’s probably the fastest I’ve ever responded to an email. It was almost embarrassing. Almost.

So here they are, a festive cranberry and port, a festive brandy and ginger and a kinda festive dark chocolate mincemeat. All very festive I’m sure you’ll agree. There’s also an Amaretto and apricot flavour that we didn’t get to try.

We were slightly confused by the jar lids – the lid edges spin while the top stays in one place – they turn out to be Duerr’s Easy Open Orbit lids which apparently make them easier to open. It says here that twisting the ring loosens it, then ‘pushes the panel away from the jar to break the seal’.

I don’t dwell too long on that though, this is mincemeat we’re talking.

Duerr’s have been making preserves for 130 years – so you’d expect them to have got it right by now. And tasting these it’s hard to fault them. They look chunky, with plenty of currants, sultanas and other fruit in the mincemeat mix. But, perhaps surprisingly, they are very smooth on the tongue. We try the dark chocolate flavoured mincemeat first and, from the fridge, it’s difficult to find the chocolate notes. We later find that the warmer the mincemeat the stronger the chocolate flavour so shouldn’t be a problem if used in a pie or other baked recipe.

The brandy and ginger is my favourite of the three, with a more obvious, boozy nose and smooth texture. The ginger gives it a warmth the other two jars lack while the cranberry and port flavour seems to taste the most ‘fruity’ despite, according to the ingredients list, actually having the least. All three are rich with a slight alcoholic nose obviously brought about by the preserved fruit.

It’s a good thing companies like Duerr’s still make quality mincemeats like this because otherwise, just days away from Christmas, I might not have had a good excuse to keep eating the stuff into next month.