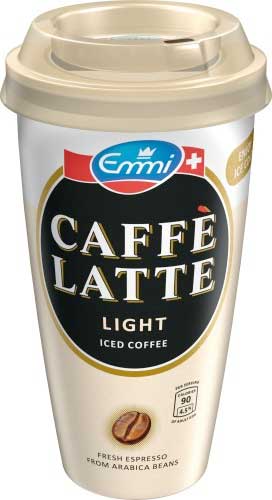 Foodepedia runs on caffeine and discreet intravenous feeds of foie gras, but a hot coffee is no fun when the sun’s out. So a delivery of Emmi’s Caffe Latte Light Iced Coffee was just what the journos ordered.

In fact we had already spent some time discussing the news that many of the high street iced coffees contained enough calories to make even Madonna’s arms swell back to normal size in an instant. Apparently women can be consuming a quarter of their recommended calorie intake when they knock back a cold coffee. Shocking news for those of us who thought avoiding soft drinks in favour of iced coffee was a good idea.

Emmi are a major European dairy brand and their standard iced coffee, bought off the shelf in convenience stores, is pretty popular being made from fresh milk and high quality Santos da Loagoa coffee. And at around £1.09 it’s not a bad price either.

So sipping first from the standard Emmis and then the light version and then with our eyes closed, the test was on.

Pretty soon we all agreed the light version was actually nicer, it actually tasted less rich and felt better in the mouth and thus more refreshing. That it has half the calories, just 90, was an extra bonus.

Those heading to the beach could do themselves a favour and get into trim by cutting calories and swigging Emmi’s.