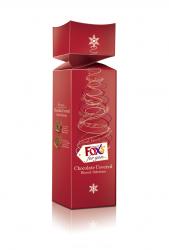 We didn’t buy boxes of biscuits in our house. Not ever, not even at Christmas. One set of cousins occasionally gave my mother a tin and what a treat it was. I still have them (the tins), a reminder of indulgences so rare that I can remember the tastes within. Richly buttery, lightly sweet, crisply crunchy, delicately golden mouthfuls – and shared.

And that’s the point. There is something much more shareable about a tin, or box, of biscuits (rather than a packet) and something much more indulgent about musing over which one to choose, looking at each in turn, wondering whether to read the description or just risk it, reaching in to pick one up, changing your mind, hovering over another, mulling over whether to have one with chocolate or without, plain or filled, new to you or a favourite, not wanting to make the wrong choice. And then biting, chewing, savouring, swallowing. It’s not the same as buying a packet and taking out a couple; you can do that everyday. The point of a box of biscuits is taking it slow, seeing the show.

I had forgotten all that when the delivery from Fox’s arrived. I looked at the contents: Vinnie’s limited edition biscuit collection in a grey and purple tin; a thinnish purple and white cardboard box containing Fox’s chocolate edition biscuits; and a deep red cracker-shaped container of chocolate covered biscuits. That was the first show. Feasting on the boxes.

It didn’t last long. And nor did the biscuits.

The chocolate edition was demolished first. Embarrassingly speedily. Not even time to count how many were in the 400g box though, looking back, it must have been 23 or 24. Not a dud among them. Well, ok, I don’t like white chocolate so there were two – white chocolate Viennese, they were, and by far the sweetest in the collection. 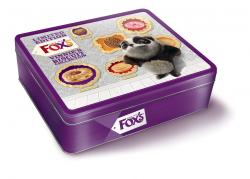 The tin containing Vinnie’s biscuit collection could never be described as gorgeously classy. It has man and kids written all over it – yes, it’s the family box. And the most fun. Jammy dodger or chocolate fudge crunch cream? Shortie or Bourbon? Fox’s Amber or (dare I admit that I quite liked it, even though it’s aimed at children) the pastel coloured iced party ring? Although the only hand that dipped in and out of this tin was mine, I could see how the contents would disappear in a typical Christmas Day household. Something for old timers, something plain, something creamy, something for dunking … Very clever. £8.00.

Continuing my scientific experiment, known colloquially as scoffing, I opened the cracker-shaped box. This should be in every grown-up’s stocking this year. Four of the extraordinarily generously coated with milk chocolate shortbread rings and five milk chocolate caramel shortcakes. £3.99.

There are other options in Fox’s festive collections including Christmas puddings: a traditional pud; a sponge dribbling with syrup, cranberries and orange; and, guess what, a chocolate bombe. When did you ever know a Christmas without chocolate?