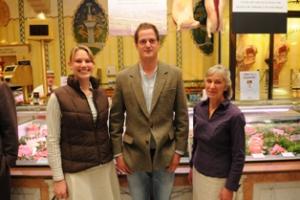 Ably and aptly fronted by celebrity chef, Valentine Warner, Harrods launched their Festival of British Food, on Wednesday this week, the festival runs for a little over two weeks until 3 October.

For the launch food writers were invited to lunch in The Terrace Bar on the fourth floor where we met and mingled with British food producers, myself clutching my flute of Knightsbridge, English sparkling wine, appropriately named, I thought, for the occasion and the venue.

We were seated and Valentine spoke briefly about the menu that he had created the recipes for and helped bring together. He had recommended working with small producers whose produce is organic. The menu consisted of three courses as well as an amuse bouche. The amuse bouche a crab croquette which had been made using a good amount of the fuller flavoured dark crabmeat, the nicely crisp bread-crumbed exterior containing the tasty soft crab mixture, it was lovely. Following this a starter of wood pigeon, cooked medium rare, with roast chicory, pickled walnuts, toasted hazelnut and some green leaves. This seasonal salad was excellent, the flavours and textures balancing the dish, which was brought together beautifully by a light tangy dressing.

The main course was huge, venison pie, beef apple and cep pie and roast shoulder of lamb with bitter herbs and honey, all slow cooked. The three component parts were very tasty, the beef and venison in their respective pies very tender, the lamb was particularly well seasoned (in a good way) and if I had a criticism to make it would be that I would have preferred it had been served medium to medium rare, its just the way I prefer lamb, but I suppose if the focus was on ‘slow food’ it was inevitable that it would be well done. These three meat dishes were served with some beetroot that had been nicely dressed and some tasty seasonal vegetables. I didn’t manage to get through the whole of mine, rarely do I eat so much during the lunchtime, but it was all good, tasty and hearty food. Desserts of queen of puddings and blackberry Eaton mess were each lovely too, though I had little room for them.

These dishes were all made using British ingredients that are in season, something that Valentine is very keen on, as we know through his What to eat now television programmes, a new series of which is due to go to air in October. They are fine, tasty examples of dishes that you might prepare at home and they, plus other Valentine Warner rcipes will feature on the menus at eight of Harrods’ restaurants during the festival.

Harrods are stocking a wide variety of British produce, including Buffalo meat, Goat meat, beef and lamb, cider, beer, wine and brandy watercress and cheeses (to name but a small selection) in their glorious food halls at the moment. Why not go along and take a look? Why not be tempted? There is some seriously great produce that is worth checking out and buying.