‘Bloody hell!’, ‘Jesus Christ!; ‘Aaagh!’ are about the only printable comments we can make after trying the hot sauces we were sent by Hot-Headz the chili specialists.

The ladydeez sensibly wanted nothing to do with our taste test and retreated instead to a safe distance while we chaps bragged about our capacity to withstand any amount of scoville scorching and made vulgar jokes about lavatory paper. This was going to be a pushover.

We didn’t have any food to add to the sauces, and anyway it would have taken away from the pure scientific nature of the product, so instead we laid on some slices of cheap white bread (starch can be an antidote to chili, while water just makes it worse) and decided to dip cocktail sticks in the bottles to ensure minimum on the tongue, after all we had five to choose from.

Scoville (SHA) units are of course the scientific measure of a chili’s heat or capsaicin content, although it is measured by humans not by electronics. What a job that must be eh? The scale runs from 0 to over 200,000 units and presumably above that the tester is either carried out dead or insensible so no reading is ever noted.

Boys like chili of course, it sets off the macho within us, the pain is our gain and we break through the wall. Even so we started, sensibly, with the least hot sauce. Tapatio Hot Sauce

You’ll find this as a table condiment all over America and it’s a cayenne pepper based sauce that isn’t all that hot (compared to what came later) and actually has a rather pleasant citric flavour. We agreed this would be just right for a Bloody Mary to replace traditional Tabasco.

Next up, Brother Bru-Bru’s Mild African Pepper Sauce. This was another not too hot sauce that had good flavour going on from the added garlic and African spices. Apparently Bruce Langhorn, the eponymous creator, was a session musician with Bob Dylan and the song Mr Tambourine Man was all about him. History does not recall if Mr Zimmerman ever put this sauce on his pretzels, although if he did perhaps Blowing in the Wind was the follow up? 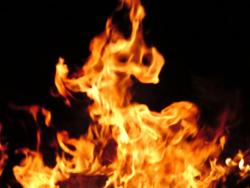 By now we were laughing in the face of the chili devil and confidently swaggering about, call this heat? Bring it on bwuv. Then we tried Pyromania! and as the song says, we weren’t laughing anymore

Made with habanero peppers and chipotle peppers this was a smoky hot sauce good for shaking on all kinds of dishes but it was definitely a lot butcher than the previous ones. A few coughs and head shakes revealed some of the team were in trouble and bread was consumed for the first time.

Two to go and the whole team still up for it we uncorked the snappily named ‘Who Dares Burns! Crushed Naga Hot Sauce’ which is actually made by Hot-Headz, the previous three being imports.

The Naga Bhut Jolokia it contains is the Guinness Book of World Records holder of the Hottest Chilli in the World and I have dried examples at home that I am actually afraid to go near. My local curry house does a naga curry though and, as the owner explained to me, the Naga may be a Killa, but underneath the mad heat is a rather pleasant sweet flavour. And this sauce actually does have a decent taste to it, but you’d be hard pressed to get down to it as it is a serious tongue burner.

Finally Mad Dog 357 which claims to be the ‘World’s Hottest Sauce’ at 160,000 scoville and quite honestly we have to agree. It’s not just mad, it’s insane and there can be no way that anyone would ever finish a bottle. Even the tiniest drop on the tongue has your eyes watering and, as Lisa once said of Apu’s curry, it’s so hot it lets you ‘see through time’. We could think of no earthly use for such a sauce except possibly as way of extracting confessions or punishing serious criminals as an option to death. Personally I’d take the lethal injection, it would be quicker.

Amazingly there is also a Collectors Edition of the sauce with a bullet key chain and tiny tasting spoon that weighs in at a massive 600,000 Scoville units.

It was interesting taste test, if a little masochistic, but we do these things so you don’t have to. And we suffer the consequences, too.

So if you know a bloke who reckons they can take the heat, why not slip one of these boys into his Xmas stocking? It will bring a heartfelt tear to his eye.