Everyone’s looking for Umami. Is it a bird, is it a plane, is it an only recently (1900’s) discovered fifth taste our tongues can detect, the one that makes us really go ‘Mmmm!’?

It is of course the latter and quite a bit of talk around tables centres on this quasi-magical taste sensation derived mostly from glutamine. It’s found in well made stocks, in mushrooms, in kombu seaweed, in preserved anchovies and even in Marmite. It’s also found, a lot, in soy sauce.

This last fact explains why we are gathered, student-like, in the tiered seats in the teaching theatre at Westminster Kingsway Catering College and why I am fighting a regressive urge to doodle on the back of the collar of the chap in front of me. I never did like lectures.

Kikkoman’s make Japanese soy sauce, a superior soy sauce they explain disdainfully, not a bit like that Chinese stuff. Kikkoman’s Soy comes in the jaunty little bottle with the red hat, is naturally brewed, and made from just four ingredients to a 350 year old recipe- water, soybeans, wheat and salt. Oh no! Salt! Ah, but fear not. 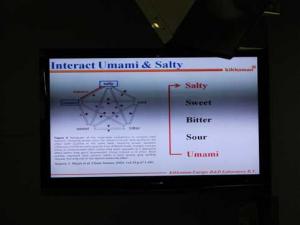 As a jolly Japanese man explains, with the help of impenetrable Power Point slides, substituting Kikkoman’s soy sauce for salt in cooking actually reduces our salt intake. This is because we use less of it owing to the umami effect -tests have shown that using soy and not salt means we perceive the increase in flavour we expect from adding salt, but as it’s achieved by the soy sauce, we are actually adding a lot less.

Proof of the pudding comes with some soup, little shot glasses of tomato soup. One is seasoned with salt, one with soy. The soy one undoubtedly tastes better, but no one raises the issue that adding soy to tomato soup will soon turn it the colour of a bloody mary. Salad leaves alternately dressed with vinaigrette made from balsamic vinegar and soy again prove soy’s superiority and a wail goes up in the nation’s middle class dining rooms ‘But we bought that Balsamic in Sienna! It cost a fortune!” 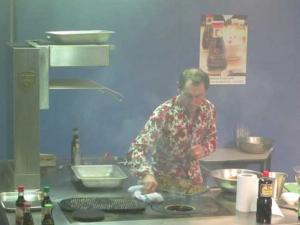 Time to bring on an expert. Nigel Barden Food and Drink star of radio has been roped in to extol the virtues of soy sauce which he does by becoming Derren Brown. His radio mike crackling he asks leading questions of his audience of food writers and then waits for the inevitable correct answer. It makes me pat myself down to check I still have my wallet and I worry he may suddenly expose me as a serial adulterer or convince me I’m a chicken.

That would be better than being a lamb, Nigel has brought along a massive bag of lamb chump chops which he marinades in soy and something else (sorry, I was still checking my pockets at that stage) and proceeds to grill them a la plancha. Within minutes the room is full of smoke into which he is beginning to disappear. Some of the more elderly food writers are beginning to cough violently and I can visualise tomorrow’s headlines topped with a picture of me being fireman-lifted to safety. ‘Gourmets get gassed horror’

The big extraction hood seems powerless to prevent imminent asphyxiation, something Nigel peering through the smoke becomes dimly aware off, and he hurries up the cooking to compensate and we are all served some semi raw lamb. To be fair, the cooked bits taste quite nice but a stampede for the door has begun and I join it, elbowing venerable writers out of my way many of whom, owing to decades of eating heartily, are no longer as quick on their feet as they could be. 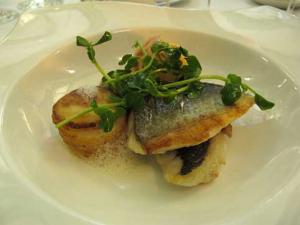 Downstairs in a room that has seen dining action since before the 1st World War,and from the strange odour around, may have still have some things of that date decaying behind the radiators, we eat a quick two course meal of pork belly followed by sea bream, prepared and served by the students, Kikkoman’s soy sauce being used for both dishes.

And it’s not bad at all, very good presentation, a bit of foam for effect, and well seasoned so full marks to the students.

With the addition of soy sauce capable of bringing about a 50% reduction in salt used in some dishes, it’s clearly something to think about and there are plenty of opportunities to swap soy for salt, especially in dark dishes. The maximum recommended salt consumption is 5g a day but in the West we often eat as much as 15g according to estimates. I think, shamefully, I may eat even more.

The Royal Society of Chemistry have used soy to make their ‘perfect gravy’ and so here is the recipe for you to try this Sunday:

Cook your roast on a bed of vegetables then add some flour to the resulting juices to make a paste. Add vegetable cooking water, scraping up all the yummy gooey bits as you go.
Add a splash of Kikkoman’s and a dash of iodised salt and some pepper. That’s all you need, unless you fancy a bit of red wine in and I wouldn’t say no if you did. Reduce to your desired thickness. As Big Sweary would say, ‘Sunday gravy for the roast. Done”