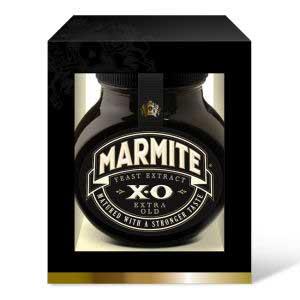 The people at Marmite marketing sure do know their stuff. Not only do they have one of the very few ad campaigns running right now that isn’t some peace of meaningless Euro-piffle that could be for anything from mobile phones to building societies, they also keep reinventing the black stuff.

In a media blitz last week they sent out jars of new Marmite XO to food writers everywhere but I was abroad and missed it. Fortunately nobody else at Foodepedia likes Marmite (call yourselves gourmets?) so our jar remained untouched until I found it last Friday.

I expected it to be super-strong, blow your head off stuff but instead it’s actually smoother and deeper like an XO cognac. They call it super-strength but that seems to me to be doing it a disservice. Matured for 28 days instead of 7 and using 4 different yeast sources, it has a darker more complex flavour and a lot more umami going on.

It works great on toast and I use the same quantity I always use – a lot – and it makes great Marmite sandwiches with the obligatory crap white bread. As any Brit will tell you, it’s not a Marmite sandwich unless it can be compressed to the thickness of a Rizla.

Some people have fretted that it might replace regular Marmite but I think not. For one thing it costs more, as a premium product should, which would make it a bit pricey for students. Others worry this new XO may just be a marketing ploy (well duh!) and won’t stay on the shelves for long. Well obviously running two product lines simultaneously is logistically difficult and so XO may well be pulled in a few months time once the publicity has run its course.

I hope not. While I love my standard Marmite I will be happy to eat the XO at weekends and on public holidays as a special treat. It’s a genuinely special product that lives up to the marketing copy.

And I bet it’s even better stirred into a Shepherd’s Pie mix than the original, which is really saying something.

Just like the product, it’s all about having unique taste and the confidence to tell the truth.