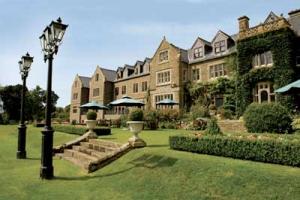 From Tuesday 6th to Sunday 11th April, Matt Gillan, rising young talent and head chef at The Pass restaurant at South Lodge Hotel in Horsham, is delighted to welcome some of the UK’s top Michelin starred chefs to guest chef over the course of the week. Chefs participating include Martin Blunos (Lettonie, Bath and Bristol), John Campbell (ex The Vineyard at Stockcross/ The Dorchester Collection’s Coworth Park), James Sommerin (The Crown at Whitebrook, Monmouthshire) and Exclusive Hotels’ very own chefs Richard Davies (The Bybrook at Manor House, Wiltshire) and Michael Wignall (The Latymer at Pennyhill Park, Surrey).

The week commences on Tuesday 6th April with Richard Davies of The Bybrook Restaurant (Manor House Hotel). Before joining The Manor House Richard spent one year at the Sawyards Restaurant, Storringon where he achieved his first Michelin star within an astonishing five months. Wednesday welcomes Martin Blunos who was awarded two Michelin stars at his restaurants Lettonie in Bath and Bristol. James Sommerin will be headlining on Thursday evening. James was awarded his Michelin star in 2007 at The Crown of Whitebrook and has retained it ever since. Friday sees John Campbell at the helm. John was awarded two Michelin stars at his previous restaurant The Vineyard at Stockcross. He is now head of food and beverage at Coworth Park which is due to launch in May. The last two days will see Exclusive Hotels’ chefs Michael Wignall who heads up The Latymer restaurant at Pennyhill Park Hotel where he was awarded a Michelin star in 2009. Then last but by no means least on Sunday 11th April, the Seven Stars host himself, Matt Gillan will be creating some more of his dramatic dishes such as Salmon Carpaccio, Crab and Yellow Pepper Cannelloni, Cep essence, Horseradish Ice-cream and Ballotine of Pork, Pink Grapefruit Jelly, Crispy Tongue and Bacon. Matt was awarded 3 AA rosettes by the AA Restaurant Guide just four months after opening The Pass. 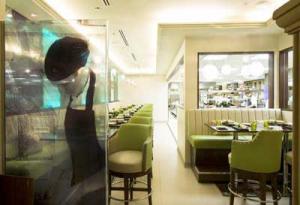 South Lodge is one of the South East’s finest hotels and is situated in the heart of the beautiful Sussex Downs. The Pass, which opened in November 2008, was created as part of an £8 million investment programme which has lifted the hotel to unprecedented new heights in five star luxury. The Pass offers a unique dining experience – 22 covers situated in the heart of the kitchen. Head Chef, Matt Gillan (Gordon Ramsay in London and Midsummer House Restaurant in Cambridge) offers a selection of four, six and eight course tasting menus, adapted for both lunch and dinner.

Throughout the week each chef will be creating a tasting menu. Diners will have the opportunity to watch all the chefs in action throughout service in the 22-cover restaurant, situated in the heart of the kitchen. The Pass, named after the moment of transition from kitchen to dining room, offers LCD screens so guests can watch the chefs at work ensuring they don’t miss any part of the drama.