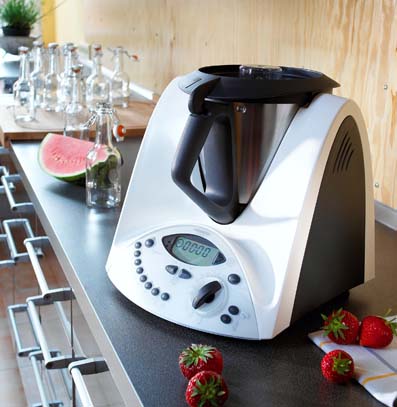 You don’t need a Thermomix in your kitchen, but then you don’t need a Ferrari in your driveway. It’s all about how seriously you take your cooking and how much fun you want to have getting from A to B. As Jeremy Clarkson might say, ‘The Thermomix is one superb piece of engineering – expensive, beautiful and a joy to drive and I’ve…….. got the keys!’

And indeed the motoring analogy is not misplaced. Just as the car reviewer waves a sad goodbye to the fantastic car he has had on loan for a week, I fluttered my hanky at the man that came for this Thermomix, went back inside to put the kettle on, stared sadly at the empty space on the worktop and broke down in tears. We had such fun together.

There is an arc to most kitchen gadgets of course, a timeline if you will. The initial stages are breathless excitement as you clear a spot for it and start reading the manual. Then follow days of non-stop usage. A month later and that use has become less. Six months or so later, the plug gets pinched for something else and the gadget goes under the stairs. Not long after comes the sad trip to the boot sale.

Not with the Thermomix though. The ex-girlfriend of a Michelin-starred chef I know complained her man ‘was almost married to the bloody thing’ and its easy to see why so many professional kitchens use one of these babies – a skilled pair of hands that never comes in to work with a hangover or answers back. Totally reliable day in and day out.

By now you’re probably yelling at the screen, ‘Yes, yes! But what does it do?’ Well what doesn’t it do? In the two weeks of our relationship it made brilliant bread dough of all types taking just 1.5 minutes to knead it, perfect pasta dough that Mama would have been proud of and pastry of every kind. It has ground spices as hard as nutmeg and as tiny as poppy seeds into fresh powder in seconds. So far, so much a superior food mixer.

The TM as we aficionados call it is much more however. Because it has a heating element within the bowl, it can make complete white sauces from ingredient zero all the way to finished sauce all in one. The built in timer, ten speed settings (including ‘stir), the variable temperature from 0 to 100C and, get this, the built in digital, zeroable, scales, mean you don’t need any other equipment. On the same principles it makes wonderful crème for crème brulee as well as crème patisserie. You just put the ingredients in and walk away. Simple and always successful.

It can make a risotto all on its own, the rice coming out wonderfully creamy and al dente. We all know what a pain making risotto can be, the constant attention required meaning you can’t do anything else while it’s cooking. With the TM it’s safe to leave and get on with something else. Plus it frees up a ring on the stove too.

Soups? You’ve got them. Ingredients are stirred and cooked in the TM bowl and then you add the stock through the top and let the TM do its stuff. Thanks to fiendish German design accuracy in order to make mayonnaise you just put your egg and vinegar in the machine and then with the motor running puddle the oil onto the lid where it drains at the just the required drip feed rate into the mix to emulsify perfectly every time.

Did I mention granitas? The blades are so powerful and so fast they can turn ice cubes into frozen grains in seconds and the ice has no chance to melt. Add some fruits and presto, dessert is done. 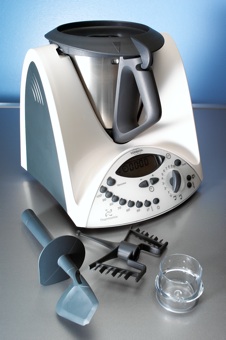 Oh and then there is the steaming function. A special tray sits on top if required and steam comes up from the machine to pass through in such a way that veg or fish are done to exactness, often while something else is cooking in the main bowl. We wrapped some salmon fillets in tinfoil having first surrounded them with fresh ginger, garlic and a splash or two of sesame oil and soy sauce and set the parcels to steam on top with some mange tout one level down and the potatoes cooked below. The result was beautifully cooked fish packed with flavour. We even steamed ‘boiled’ eggs, in it as well as making creamy scrambled eggs. It will make jam as well, because the stirring is constant and the heat accurate. It melts chocolate and it whisks egg whites to stiff peaked perfection. Cleaning is as simple as adding some hot water and running it briefly at its top speed (it goes from 100 to 10,200 RPM) so that it virtually cleans itself.

The recipe book that comes with the TM is all embracing – from family meals to baby purees – and is on the whole reliable. It does sometimes neglect to tell you how many people a dish is for, but this can be worked out. On the TM website, which is community driven, new recipes appear all the time many of which come from professional chefs finding new things to make. In fact for the creative cook, the TM is perfect, giving you control over the elements you normally have to fuss over.

Demonstrations are held regularly all over the country and you can find details on the Thermomix website.

There’s no getting away from the fact that £799 is a lot of money, but the investment will pay off. The TM is beautifully built and has a reassuringly solid quality feel to it that suggests it will be very unlikely to ever let you down. You don’t ‘need’ one, but you definitely need one! It will transform your cooking. I’ve already told Santa what I want this year.