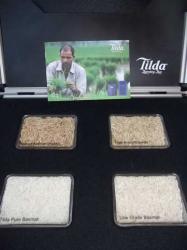 Is there a clinical term for ‘a fear of rice’ as I think I’ve been suffering. It’s not that I can’t stomach the stuff or that it gives me the heebie-jeebies but I don’t think I’m alone in coming over all clammy at the thought of having to cook a pan full for anyone but myself.

There are too many potential pitfalls (not enough water – repent in haste; too much water – wallpaper paste) and the prospect of having to a) start again or b) sack it off and call for a take-out is a kitchen show-off’s worst nightmare. Let’s have pasta instead.

Well no, you see like most things knowledge is power and after a very pleasant evening at Le Café Anglais hosted by the nice folk at Tilda, I now feel brave and learned enough to give rice more air time in my weekly repertoire.

The reason I think most of my previous efforts have been pretty dire is my natural leaning towards ‘own brand’ basmati. The best way I can describe the difference between this and the 100 per cent pure Basmati that Tilda sell is those old indoor market stalls that used to sell bags of broken or ‘seconds’ biscuits, compared to, say, a box of Duchy Originals Chocolate and Vanilla All Butter Shortbread.

The fact is Basmati rice is a sensitive little crop that will only grow in the Punjab region of India where the mix of soil type and water table is just right. If it grows too tall it can be prone to wind damage and to the 10,000 farmers that Tilda works with and supports through a Fairtrade style scheme, it is considered as precious as pearls and the ‘prince of rice’.

Once it has been harvested it is milled and dried either as wholegrain or brown rice, or the bran layer of kernel is removed leaving pure white basmati. The broken biscuit metaphor comes into play when you hear that Tilda use infra red sensors and DNA (I’m not joking) to ensure only unbroken grains make it into their packs, whereas other brands will just chuck everything in, often including some filler long grain rice to make up the numbers. Broken grains release starch and we all know what that means for your curry buffet…

So there’s the moral of the story – I might have been saving a few pence on the pack but when a portion of Tilda costs just 30p per person and the results are pretty much guaranteed to come good, I think I have been guilty of what my mum would call ‘false economy’ all these years.

If we’re prepared to pay a bit extra for cave aged Comté or slow matured salt marsh lamb to get the best of the best, why shouldn’t we do the same for pure grain basmati rice?