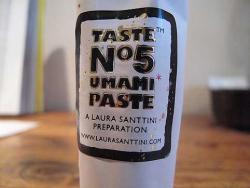 I have to say that looking at this tube when it popped out the post bag I immediately thought of Jumanji, the Robin Williams film from 1995, a time when he was still intermittently funny. What on earth is Umami?

I’m being a bit disingenuous to be honest, I have heard of the umami concept before, just never seen it defined in an actual ingredient. Umami, for those of you with proper lives to lead, is an idea that keeps cropping up in the foodie world. Basically, and to save you the trouble of googling it, the idea is that in addition to the four well-known taste receptors on our tongues – sweet, sour, salty and bitter – there is ‘savoriness’ a rather ill -defined concept but one which has been described as ‘that which makes you go mmmm!’

Like many of these things it was first identified in Japan in 1908 and since sold as MSG, which why you see sacks of the stuff in Chinese supermarkets. Glutamic acid is however naturally present in meats, cheese, stock and other protein heavy foods and the makers of Umami the tube have gone down this perfectly acceptable route to create their product.

Dobbing a bit on our tongues it does indeed taste very yummy. For me the main flavour is a cross between an anchovy paste like Pater Peperatum and of harissa, both of which I love. I can see that if used as suggested; in sauces, gravies and risottos as well as rubbed on meats it would add a magic touch. I could eat it just spread on a crostini too.

Its part of the Easy Tasty Magic range by Laura Santinni who looks a bit tasty herself, if I am allowed to say so in post PC 2009, and who ran the Santinni restaurant in Belgravia for eight years. Unsurprisingly then inside the paste are Italian ingredients such as porcini and Parmesan.

It’s neat idea, a short cut to impressive results. If we can stop eating the stuff directly out of the tube, we’ll take it home to try and add some magic to our cooking.

Available only in Selfridges around the UK and at £2.99. www.laurasantinni.com