After the confetti is gone and the cat/dog has finally, finally marked your now discarded Christmas tree simply because it can, it’s probably a good time to admit that Christmas, New Years and the festive season is long gone. For many, January is a month of doom and bleak mid winter gloom, but here at Foodepedia we like to buck the trend and get back out there for a new year of foodie frolics and fun. January is the month of cutting back the calories and ditching the sofa surfing, but there’s still plenty of cheat days in your new diet, so join me for in a button popping , guilt-free guide to food this January. 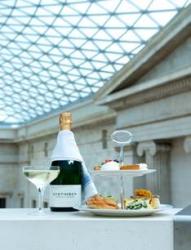 New year, new restaurant, same world class collection. In January, The British Museum welcomes the Great Court restaurant and ushers in a surprising new trend: landmark dining. The redesigned restaurant will be in splendid company on a mezzanine floor above the world-famous Reading Room and directly beneath the curved steel and glass roof of the Norman Foster-designed Great Court.

Perhaps the most delectable exhibition at the British Museum (and the only one you can eat without being kicked out,) the Great Court restaurant arrives in January with a locally sourced menu focussing on traditional European dishes. It is the latest venture of noted landmark lovers Benugo, who also operate restaurants at a few of London’s other best known museums.

The restaurant will be open daily for lunch and afternoon tea, with an additional dinner service every Friday. A rotating set menu will pay homage to every major exhibition throughout the year, for example during Ã¢â‚¬ËœVikings: Life and Legend’ (March to June 2014), Scandinavian inspired specials will be offered, but probably with less pillaging and only a few invasions planned.

Aaah the Six Nations. Get out the leeks, daffodils, headgear and mouth guards, and call up your old buddy Beelzebub to sell your soul for a Twickenham ticket. If soul-sacrifice is a bit too heavy a payment (call yourself a fan?!), there’s a whole 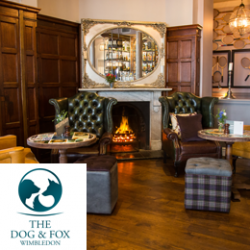 host of scrum-mad pubs around London with special deals on to make match day a little bit special for the fly-half in your life. Though one of rugby’s favourite fixtures starts on 1st February, it’s never too early to plan.

Fulham pub Waterside will be hosting, for £12.50 per person, a package that includes exclusive use of the mezzanine area including 42Ã¢â‚¬Â TV screen for up to 35 guests (minimum 15) and some Six Nations-inspired stone baked pizza platters Ã¢â‚¬â€œ  The Full English (smoked bacon, pork sausage, field mushroom topped with fried egg); Luck of the Irish (Guinness-braised beef and oyster); The Valleys (lamb meatballs and Caerphilly cheese); and Ooh La La (brie, red onion and Portobello mushroom).

Over in the heart of Wimbledon, the Dog & Fox will be hosting a similar affair, with 100 of the Queen’s pounds getting you use of the mezzanine area (max capacity 25,) and sharing boards with mini Cumberland sausages, salt and pepper squid, pork scratchings with apple sauce, black pudding sausage rolls and baby back ribs with’Dog & Fox’ dry rub.

From 20th Ã¢â‚¬â€œ 26th January 2014, Michelin-starred restaurant Seven Park Place will be hosting a six-course tasting menu from the four corners of Caledonia, including William Drabble’s signature dish, ravioli of haggis, which is no doubt far, far more delish than it sounds. In collaboration with Slow Food UK, the Chef Alliance and Highland Park Whisky, diners can tuck into seasonal Scottish faves such as Uig Lodge smoked haddock soup with whisky and saddle of Scottish highland venison with beetroot.  Priced at £72 per person or £126 with paired wines, including a glass o 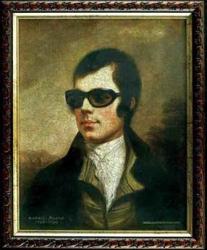 f Highland Park 18-year-old single malt whisky to round off the meal, this is definitely one of the nicest Burns Night menus around.

For something a little less highfalutin, try West London’s Princess Victoria.  To commemorate Scotland’s best loved poet, Princess Victoria are hosting their very own ode to the haggis in the form of an’Ashes, Smokes and Burns’ Supper Club on Thursday 23rd January. The evening will kick off at 7.30pm in the dining room with a three-course set menu for £30.

The menu has been designed by Head Chef Matt Reuther formerly of No 1 Lombard St, Foliage at the Mandarin Oriental and the three Michelin-starred Oak Room where he started as a commis chef for Marco Pierre White. It will consist of Oak whisky barrel smoked langoustine and home cured bacon cassoulet to start, followed by Scottish mutton haggis, slow and low ash wood roasted shoulder, smouldered garlic, neeps and tatties. Finally, dessert of Applewood roasted quince, cranachan and Laphroaig will be accompanied by various wines and whiskies.

Popping up in Camden this month Ã¢â‚¬â€œ The Blues Kitchen Ribs Festival. Ribs are often messy, rarely a good date idea, but always delicious, moorish and satisfying, so round up a few friends, the good honest kind that’ll tell you when your teeth are in a worse state than your hands, and head to The Blues Kitchen in Camden for a celebration of one of America’s stickiest and succulent specialities. 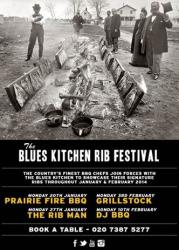 To celebrate this most mucky food, The Blues Kitchen  have invited the nation’s best rib chefs to join forces and offer up a Rib Festival the likes of which ye have never seen.

During January and February this collection of pop ups will be taking residency in The Blues Kitchen on Monday nights, after which The Blues Kitchen Monday rib night will become a regular fixture The lineup will includeÃ¢â‚¬Â¦

Additionally, a stack of pork ribs will be priced at £13.90 and beef ribs at £16.50, along with southern sides such as crunchy slaw, sweet potato fries, mac n cheese and more. Wash it all down with Big Wave, a light ale, chosen especially as a refreshing drink to compliment the Ribs. Sounding hella tasty? Watcha’ waiting for?