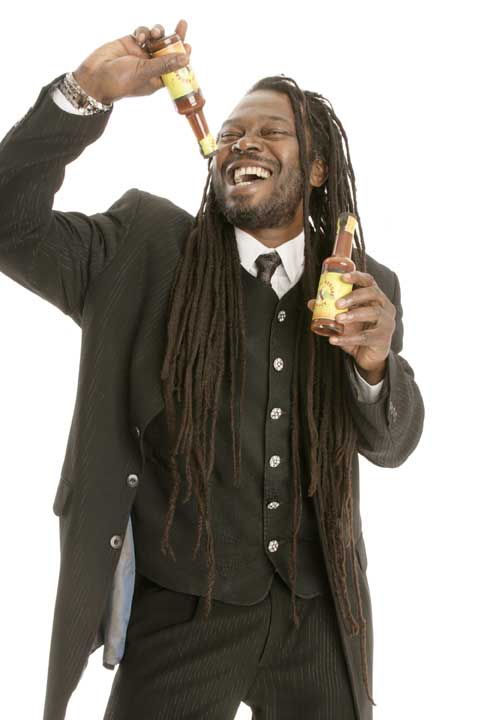 Following a memorable musical pitch, Levi Roots, 50, won BBC’s ‘Dragon’s Den’ with his potent ‘Reggae Reggae’ sauce. In exchange for a 40% stake in his business, he secured the support of millionaire ‘Dragons’, Peter Jones and Richard Farleigh – not to mention £50,000. Roots’ life has been fascinating: from crossing continents and time in Pentonville prison to being at the forefront of the Rastafarian music scene for over three decades. He has seven kids and three grandchildren and lives in the same flat in Brixton as he did before fame and fortune

How did Dragon’s Den happen?
I was singing about my Reggae Reggae sauce at the World Food Market, Excel when a researcher approached me and invited me on the programme. I don’t watch TV, so I thought she was joking. When I told my kids, they said, ‘dad, don’t to do it, we love you the way you are.” If it went wrong, it meant embarrassment for all. There’s no Eddie ‘the Eagle” syndrome in Brixton – I’d have to come back with the goods…

Where were you born?
Clarendon, Jamaica. I’m the youngest of six. I was practically raised by my grandmother, Miriam because my parents moved to Britain to start a new life. She taught me Jamaica’s bounty of plants, herbs and spices and the pleasures of cooking them, sharing the recipe for her jerk chicken sauce, handed through generations. That became Reggae-Reggae. Because they were so poor, my parents could only bring a child a year to Brixton. But there was an advantage as my family got smaller – more space in the bed! When I was 12, I was the last to board an iron bird away from an idyllic life. I got my first taste of foreign food on that flight – baked beans! Shocking! I was used to fresh food. One day I’m going to make a better version – ‘Reggae Reggae Beans’.

Describe the early days of Reggae Reggae?
After months in the flat, tweaking the recipe, I put it in a bottle, gave it a name and sung about it from a stall at the Notting Hill Carnival. That was 1991 – it took another 16 years of rejection from banks and businesses who thought it looked and sounded ‘too black” for my time to come. But it was always popular, outselling the records in Brixton’s best music stores.

How did you cut through the failures on Dragon’s Den?
Anyone silly enough to go onto a show like that with a guitar and sing deserves to win. When I assured Peter Jones it would sell millions of gallons, he laughed. But when Sainsbury’s trialled it, it became their fastest selling product. So Peter kept on laughing, but for different reasons!

Soyer, Escoffier, and now Roots… Are you the latest great producer of bottled sauces?
Even though you might have spent hours cooking, I see my sauce as the crown to your dish! Reggae Reggae has sold over seven million bottles. And we’ve launched seven others as well as the chicken grills.

Aside from your Grandmother, whom do you admire?
Everyone needs a mentor and Peter Jones is mine. He taught me so much about business. Whilst I bought back Richard Farleigh’s shares, I want Peter to be a part of the business forever. Also, Nelson Mandela, who I sang ‘Happy Birthday, Mr. President’ to when he came to Brixton with Prince Charles in 1992. And Bob Marley who came to Hammersmith after being shot in Jamaica. We played football in Battersea Park. Through knowing him, and growing-up with his music, I learnt to appreciate my African Caribbean identity. That’s why I changed my name to Levi Roots.

How was the filming for your forthcoming TV series?
I kept surprising myself with just how good I was! For one of the episodes, we went to Scotland’s Mull of Kintyre in search of my clan. They turned out to have a gruesome history. I was born ‘Keith Graham’, a name representing a legacy of slavery. It’s still printed on my passport, although I’m changing that. Having such a British name made school tough. You’ll see in the programme that I was measured for a kilt but chickened-out trying it when someone said that you wear nothing underneath!

Care to share some of your weirdest fan mail?
I keep a folder of the strangest e-mails. A lot of them say Reggae Reggae improves sexual stamina. I haven’t found that – it’s just too, too hot for certain places! There was a lady who six weeks overdue gave birth immediately after satisfying a craving for my sauce. We could put ‘may induce labour’ on the bottle.

How does Reggae Reggae feel in the mouth?
It dances, reminding you that it’s a grown-up sauce with a kick of heat, right at the back. Despite being made with Scotch Bonnet, which is one of the hottest peppers in the world, I never wanted to make a very hot sauce – and honestly, it behaves. But I used that pepper because it delivers flavour as well as heat.

Your slogan is ‘put some music in your food’, but what would be your desert island luxury be – sauce for fish, or music for your soul?
Life’s not just about feeding your belly. I’ve performed with some of the greatest musicians and was even nominated for ‘Best Reggae Singer’ at MOBO. I’m planning more roots music, remixes, re-releases and fresher lyrics and rhythm.

Do you miss Clarendon?
Maybe Keith Graham misses its peacefulness, but Levi Roots gets his vibe from cities. I need to feel alive, and my clan are here in London.

Do you have a guilty food pleasure?
I love ‘Kinder Bueno’ bars with my tea. If I see one, I can’t resist it. I used to feel the same way about Twix for 20 years.

Do you consider yourself a celebrity?
I like the sound of that term. I always felt I should be rich and famous and it was amusing to pose next to the life-sized cut-outs that ‘Subway’ made of me. But the real satisfaction came when Gordon Brown invited me to No. 10 as a black man who achieved financial success through enterprise, rather than kicking a ball.

How have you dealt with fame?
I still live in Brixton and try to give something back. I do a lot of school visits, sometimes as many as 15 a week. I want to spread the word that if a black Brixtonian Rastafarian can make it with a ridiculous sauce, so can they. I’ve been successful because I’ve put myself in my product – people can see if you’re not passionate. As well as schools in South London, I’ve been invited to Eton and Cambridge, where Rastamen don’t normally get ‘big-ups’. And I’m building something lasting to help kids learn about food and business – the ‘Levi Roots foundation’. Starting with five kids from inner cities, I’m funding their scholarships for the Royal College of Agriculture.

What would it say on your gravestone?
‘Dragon Slayer’. Whilst I slayed five to get my sauce into Sainsbury’s, we all face dragons everyday, even our kids have them. Slay them!

And your motto?
Take the chance when it’s served.

What of the future?
As well as my best-selling ‘Reggae-Reggae Cookbook’ (Harper Collins), I’ve just finished ‘Caribbean Food Made Easy’ (Mitchell Beazley) in time for the BBC series. And I plan more writing. I’ve teamed up with Bird’s Eye to create Reggae Reggae Chicken Chargrills, bringing a taste of the Caribbean food to tea times. Who knows, you may well see the first black Captain Bird’s Eye!

‘Caribbean Food Made Easy’ airs on BBC this August.