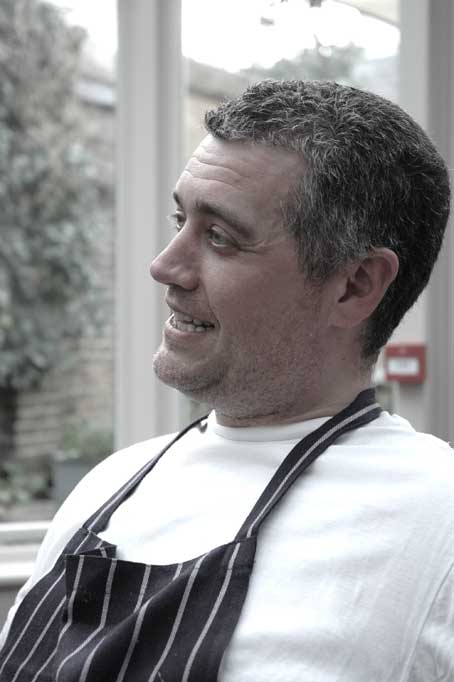 ‘Don’t look now’, says our photographer, nodding in the direction of over my shoulder, ‘but that’s Bob Willis the ex England cricketer sat behind you!’ Some weeks ago when we were lunching at Pont de la Tour, Al also reckoned that he saw the entire English cricket squad behind me as well as half the Sky presenter team. He’s some kind of sportsman ‘twitcher’ I reckon, or he’s winding me up.

‘Oh yes,’ confirms Paul Merret joining us after lunch, ‘yes that was him and we have xxxx and xxxx in regularly too’ (famous names concealed to allow them some dining privacy) The Victoria is that kind of place, located in a very nice part of London just a full toss away from Richmond Park, it’s a place that’s sufficiently off the beaten track to attract diners who want a quality meal that is no fuss in style but Michelin standard for flavour. Paul found it after a long search for something suitable.

‘Prime sites are hard to come by outside London,’ he explains,’ and I did want to be in West London as it’s where I live. Mind you when I first started with an apprenticeship at the Ritz I had a flat in Brixton with nine other chefs! Just down the road from the prison, so I have fond memories of that area too. That was a good place to be twenty!’

‘So why am I here?’ he asks rhetorically, ‘on the surface it is an odd location I suppose but I have a few reasons. One is that we noticed’ (he’s referring to his business partner Greg) ‘that it had a very loyal local clientele and second it’s a hotel, which is a great source of revenue. We have seven rooms here. A lot of locals like to put up their relations in the hotel when they come up to visit, also people stay here who have come to see Kew Gardens or the Park.’ 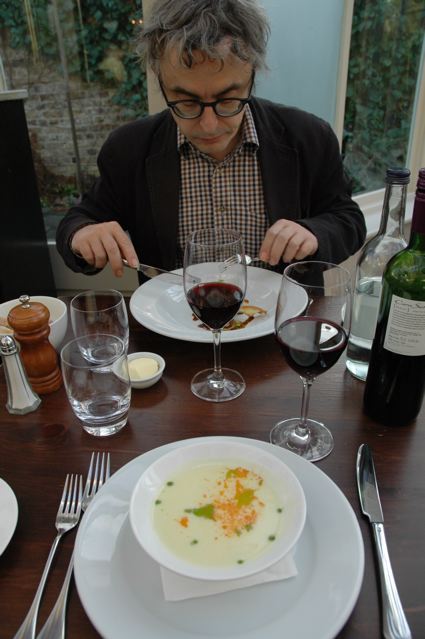 The jump from top chef into being an hotelier wasn’t too big a financial one though. ‘Actually,’ Paul says, ‘our limited budget we just spent on making the floor space in the pub restaurant work better. The hotel rooms were already nice enough, luckily. Our next big job is the garden space, we’re going to seriously attack that. There’ll be a big grill going in, fridges, more tables and chairs, a bit of planting and everything we need to make it a real summer spot because we moved in too late to really see the summer of 2008’

Presumably too, Paul was busy on his allotment which he writes about so engagingly in his book ‘Using the Plot’ and let’s not forget he’s often on Saturday Kitchen TV show too. A busy chap. ‘I’m looking forward to the summer here, it’s going to be great,’ he says with a grin.

And yet here’s a man who gave up a top role as a star Michelin chef to open a pub/hotel/restaurant. ‘All my training, all my background including under Gary Rhodes, was that kind of cooking, ‘he points out. ‘I’d reached the point where I could not imagine not being in the kitchen for service because there was so much of me in the food and’ he sighs. ‘I had kids and I was not in the house enough. It had to change.’

‘The thing is, ‘he laughs thinking back, ‘ I thought I could be one of those classic pub chefs, stirring great big pots and turning out the food onto a plate, a bit of bread you know, simple. But I tried that and I’m not very good at it to be honest. So now I do my usual repertoire, if you like, but turned down in intensity a few degrees. I want people to go away saying they had great food at a reasonable price. I want us to be challenging people who would normally jump into a cab and say, go to Tom Aitkens, for dinner. I’d like them to think they’ve saved a few quid and come here for comparable food. Not quite the same, but not a million miles off. And in the pub section there’s beer and bowls of chips and pints of prawns which is a good rolling source of customers. The ‘wet’ sales help the restaurant turn a profit too.’ 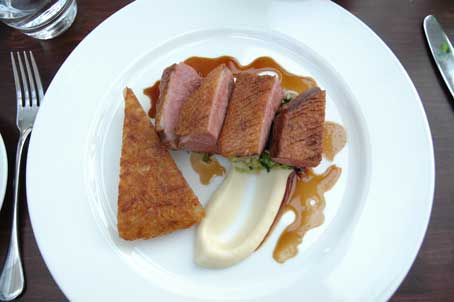 I have to ask him about his book, Using the Plot because so many chefs do cookbooks but no one as far as I know has done one which is half recipe book and half very funny, very well-written, story of how one man came to tame an allotment. ‘Well you know in my professional life my main memorable achievement was that first Michelin star,’ Paul reflects, ‘an incredible surge of satisfaction. But you know I’m prouder of that book because it took more out of me. Some days, I couldn’t get a word down and other days I couldn’t keep up with my thoughts. It was an incredible experience. I’m not sure I’d rush into another one though. You have to be honest in that sort of writing and it’s hard.’

Honest he certainly is. So many people portray their kids as superbeings, Paul’s are just like yours and mine – more interested in the Playstation than digging a trench – but he tells of his attempts at bribery and corruption with great good humour and I’m afraid to say I laughed when he wrote of being carried off the allotment on pretty much his first day, having put his back out.

The funeral party is leaving, looking pretty cheerful all things considered probably due to a combination of the usual relief of it being over and the drink and great food. Paul watches them go, ‘I said to Greg,’ he laughs, ‘ a bloke’s in to review our food and interview me and we’ve got a wake going on and a fire alarm with a mind of it’s own. Great!’

He can afford to be relaxed, the food is excellent and well priced and the place is warm and welcoming. I’ll be back as soon as I can; maybe I’ll get to see some more famous cricketers. Howzat for an added dining extra?