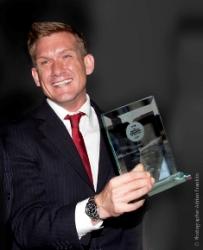 Winning Restaurant Manager of the Year in June must be one of the highlights in your career, what did it mean for you?

After fifteen years working in front of house positions in London restaurants I still feel that I am learning and evolving, new challenges arise all the time. Winning Restaurant Manager of the Year gave me a sense of fulfilment and recognition for all that both me and my team have done over the years leading up to it. Without the team I have here at Babylon it wouldn’t have happened, neither would I have been given the Award of Excellence nor would we have won the Visit London award. I really do see all three of these as awards for the team.

How do you think that it has reflected on Babylon?

I think the award will have heightened Industry awareness of Babylon, which has to be a good thing. It has certainly had a really positive impact on the team here most of whom have been working with me for a long time and I really believe that a happy productive team leads to satisfied guests. This has been a time for celebration.

In your 8 years of working at Babylon, other than winning the UK Restaurant Manager of the Year is there one experience that stands out above others, of which you are particularly proud?

For me, winning the Visit London, Best Restaurant in London in November 2009 stands out, this was a team award and the feeling of fulfilment for me personally and the team, was incredible. Being there at the Royal Albert Hall and hearing the announcement then going up on stage to accept the award with them has to be my proudest moment.

Is there any one key rule that makes for a good customer dining experience?

Making each customer feel special is the key. It is like inviting the customer into your own home and making sure that they enjoy the experience, small things are important, acknowledging them, remembering individual customer names and needs, if they have been before, all go towards making the customer feel as good as you can.

The relationship between front of house and the kitchen is an important one, how do you set about developing that and ensuring it is maintained?

Maintaining good communication is essential, the head chef at Babylon, Ian Howard and I lunch away from the Kitchen at least once a month so that we are having a conversation on a level, not over the pass. If something has not gone well during service the head chef and I will have a de-brief away from both kitchen and front of house colleagues. It’s also important to remember that we are one whole team and to be inclusive when arranging anything, like for example ‘secret Santa’ at Christmas.

The front of house team create the atmosphere and the delivery of food would not happen without them, I see these two distinct parts of the team as being equally important. Eating in a restaurant is like theatre, excellent performance and presentation are as important as excellent food.

Even in the best run organisations, things occasionally go wrong, has there been such an occasion for you at Babylon and how did you overcome it?

Yes there was one Saturday evening when we had a full restaurant and the power failed, this was something entirely beyond our contro.

Clearly we had to do something quickly, I brought staff together to tell them how we would handle the situation. Fortunately we keep a store of candles, so we firstly ensured that all tables had candles, informed the general manager what was happening, and sent someone to find out what had caused the power failure. I announced what was happening to the entire restaurant before visiting every table to ensure they were alright. We gave each customer a complimentary drink, the atmosphere and ambience in the restaurant was really good. Fortunately the problem, an electric cable having been cut through, was fixed after a short while and we were able to get back to normal service.

How do you deal with the customer who is determined to be difficult?

Well, on the occasion of the power failure, for example, only one table were unhappy with their dining experience and complained about having to wait for mains, I listened to their points and responded by agreeing some light compensation. It was encouraging that customers on a neighbouring table made a point of telling those who were complaining that they thought that they were being unfair as this was an issue beyond the restaurant’s control.

Is the customer always right?

As I said, it is important to listen to the customer and understand where they are coming from. You also have to recognise that a situation might be exacerbated by alcohol and in those circumstances you have to find a way around the problem. It is important to make things right for the customer. It is also important to take on criticism as well as good feedback and to learn from it.

Having won the Restaurant Manager of the Year accolade, where do you go from here?

For now I want to enjoy the recent achievements and to keep striving to do better. I want to develop what we offer our customers here at Babylon, perhaps by introducing new menus or themed evenings and generally, to keep raising the bar.

I think having been given the Restaurant Manager of the Year award, it carries with it some responsibility. I would like to do what I can to raise the profile of front of house as a career path for young people, to encourage them and help them to shine. As part of that Virgin are working with the Academy of Food and Wine to create the Virgin Rising Star award to find promising young front of house staff. The winner would have the opportunity to spend time here with my team at Babylon as well as at Virgin HQ and of course this might lead to further opportunities.

One of the other responsibilities that falls to me in May, is to be part of the judging panel for this year’s Restaurant Manager of the Year.

Yes, at some point, but at the moment I am building on the last eight years of personal growth at Babylon. The Virgin organisation does engender a loyalty among its staff and I, for one, am very grateful for the belief that people have had in me as I have risen to the Restaurant Manager role. Having said that, I would like to have my own restaurant at some point – when the time is right.