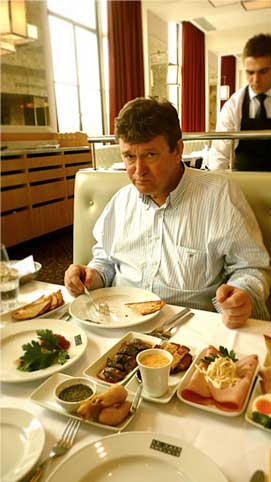 ‘It’s a good, strong Essex bird,” said Rowley Leigh as he took me through his Label Anglais chicken. ‘Points to note: long, deep breast, good line of fat, a muscularity of drumstick which shows that it’s moved,” (he repeatedly pinched it) ‘and strong skin. There’s protein in that. When a French butcher came to flog us some kit, I showed him one of these and he gasped, ‘Ca c’est undeniably artisanal!’”

We sit on eau de nil banquettes facing the uncooked bird at ‘Le Café Anglais’, Leigh’s Bayswater restaurant famous for its rotisserie-spun poultry. ”The Wallace’ does London’s second best chicken, and ‘La Petite Maison’, comes third. But we’re number one,’ Leigh states” and we use everything, including the heart, liver and carcass, which makes fantastic stock.”

What was a sprawling McDonald’s complete with a ‘dark paedophile’s corner” was rehabilitated into deco splendour by designer, Jane Ormsby-Gore, ‘the ‘Lady Jane’ of the Rolling Stones.” She elevated ceilings and unmasked windows, replacing plastic and polystyrene for chrome, oak and bird’s eye maple. Despite its shopping centre location and daunting scale (the liner like space seats 170), Leigh approached the project as instinctively as one ‘who would have been an architect in another life”. However the buoyant economy of 2007 ‘seems a long time ago, when we were actually oversubscribed by half a million pounds.”

Now nearing 60, it seems that the chef portrayed by critics and colleagues as a ‘founding father of modern British cooking’ has taken his time to realise the dream of owning a grand restaurant. His unconventional patience is qualified by his brigade, ‘a mixture of journeymen and young kids, not all wannabe head chefs at age 22.”

Leigh studied English at Cambridge before dabbling in farming, enjoying ‘philosophical speculation going around on a tractor”. After an aborted attempt as a fiction writer ‘and afternoon man” he discovered a love for cooking, ‘falling into” the role of grill chef at Covent Garden’s celebrity den, ‘Joe Allen’s’. From there he learnt the grammar of cooking with the Roux brothers at the ‘Gavroche’ of Sloane Street, before becoming buyer and ‘general factotum”. He soon progressed to head chef at their city staple, ‘Le Poulbot’. He still visits Le Gavroche for game, ‘proactively looking past the printed menu” for ‘woodcock, saddle of hare,” or ‘an offal lunch at the set lunch price.” 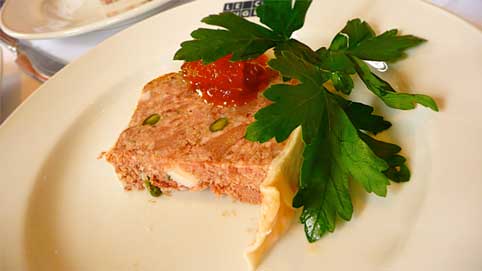 At weekends he moonlighted in the kitchens of his university friend, Alastair Little, the self-taught chef known for his radical ‘keep it simple’ approach. At ‘K.P.” (‘Kensington Place’), one of a new generation of restaurants to place as much emphasis on dining room design as well as food, Leigh spent two decades crafting ‘enduring” British food, ‘stronger than fashion.” Amongst the legendary dishes were griddled foie gras and sweetcorn pancakes, beloved by the media clientele. In addition to Little, he rates Mark Hix, a ‘creative spirit, who is brilliant at mining British food” and ‘making things better.”

As the first of three bottles arrives, we discuss his defiantly European wine list. ‘A savoury menu needs savoury wine. It underplays sweetness.” His epiphany happened in the wake of the 1973 ‘Winegate’ scandals, when an esteemed shipper was found guilty of ‘improving’ Bordeaux wine with Rioja.

‘My father bought some cases cheaply from a farmer. The labels were damp – who knew what they would taste like? The first we liberated was a ’62 Latour. Most were first growths. And the heavens opened. Blushful Hippocrene! But when I had the fortune to try the same vintage a few years ago, it didn’t recall the same magic.”

On the subject of critics, Leigh trusts ‘Adrian” (Gill) although ‘Giles” (Coren) is the most amusing. Despite receiving broadly favourable appraisals for the Café Anglais, he half-jokes of bloggers, ‘I want to get a t-shirt printed which says ‘Fuck-off – I don’t read you!”

Leigh himself is an established writer, three-time winner of the Glenfiddich award. Asked about the process, he quotes Thomas Mann, ‘A writer is a person for whom writing is more difficult than it is for other people.” In addition to his columns in the Financial Times, he is author of ‘No Place Like Home’, a celebration of domestic dishes that ‘no restaurant can improve.” Despite his high profile, when I ask if he is a celebrity, he vehemently denies. ‘It was the turn of photographers in the ’60’s, hairdressers in the ’70’s, bankers in the ’80’s and then chefs in ’90’s. But they’re having their day.” He briefly pauses for a sip of claret, ‘if you want a real superstar, talk to accounts about ‘Roger the egg man’ – the only supplier who demands payment weekly!” 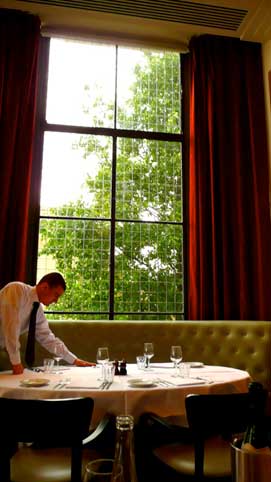 We pause as waiting staff, including Leigh’s children, Ruth and Daisy collage our table with signature hors d’oeuvres. A dexterous, smoked kipper pate is my favourite (and also his wife’s). When I ask what the game terrine contains, he tut-tuts, ‘for God’s sake, a gentleman doesn’t ask what’s in the terrine!” Whilst cooing over his most famous dish, Parmesan custard and anchovy toast, I wonder whether those words would grace his gravestone. He seriously ponders, then draws the words in the air, ”Rowley Leigh’, then in brackets, ‘toast’.”

With such rich appetisers, then pike boudin, kid and of course lemon-scented chicken, I venture to ask could the Rowley Leigh ‘genre’ be described as temperate bourgeois? ‘How dare you!” he says, ‘my situationist inner self is not ready to take on the mantle of the bourgeoisie just yet.” This secret fanatic of the ‘Fray Bentos’ pie is however, ‘toying with the idea of bringing back ham mousse, last seen in ’62.”

Whilst Leigh intends Le Café Anglais’ dining room to be democratic – providing ‘affordable luxury”, from the moment it opened it attracted a ‘distinguished” clientele of royalty, sports stars and the ‘literati”. But despite the veil of civility, there will always be problematic customers. Leigh agrees with Anthony Worrall Thompson that the worst diners are unhappy couples, ‘incredibly impatient, wanting dinner over as quickly as possible.” But he is rarely the Diva, having only thrown out one couple. ‘A chap described me as ‘reprehensible’, with ‘appalling, greasy long hair’. Whilst I hadn’t had a trim in a while, it wasn’t ‘greasy’. So I tore up the bill and told him to ‘fuck-off’. But that was a moment of failure. I prefer Michel Roux Senior’s method of sending a message, whereby two commis waiters remove the table.”

As I excavate Leigh’s lemon meringue pie, the ‘Queen of Puddings’ – a sign of his emerging ‘geriatric sweet tooth” – he tells me about ‘The Tropical Forest’, an enormous ‘botanical orgy” gracing the far wall. ‘When we opened, a customer put their elbow through it. At great cost, we had it repaired. I’m not sure whether it was the same person, but it soon happened again.” Other art includes sculptor Kenneth Armitage’s ‘scatological” sketches of ‘The Reeve’s Tale’, which hang in the bar. Whilst some people complain about the scene of copulating horses, Leigh is unfazed. ‘I’m thinking of buying and displaying a dysfunctional dolls house where the host has been flattened by marauding guests.”

Despite Leigh’s compelling, and occasionally black humour, he remains a man of purpose. ‘I hope I’ve created something meaningful here, providing employment for a great many people who look to me not only for money, but guidance and leadership. Le Café Anglais is not just a sweatshop. It’s a workshop. And we’ve built it to last…”