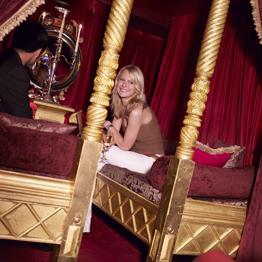 If you’re hoping to meet some Irish women on St Paddy’s Day, step on over to The Gore Hotel for Black Velvet cocktails and some Irish entertainment. On 17 March 2009, The Gore is celebrating St Patrick’s Day with a festive House Party in conjunction with the Women’s Irish Network (WIN).

Guinness & Champagne along with oysters and soda bread will be served in Bar 190 from 7pm until 8pm. From 8pm, guests will be invited to the opulent banqueting rooms to enjoy traditional Irish entertainment and cuisine, including an authentic Irish stew.

Surprise guests will perform for diners during the evening and there will also be an Irish karaoke, while age-old recitals embracing the traditional celebrations will be held in The Gore Hotel’s Green Room. Don’t forget to wear a hint of green!

Set between Knightsbridge and Kinsington, Bar 190 is world famous. The dark & gothic Tudor interior creates an atmoshphere where guests and local residents mingle with celebrities from the worlds of film, television, fashion, publishing and advertising.Tickets: £50 per person available from winevents@hotmail.co.uk