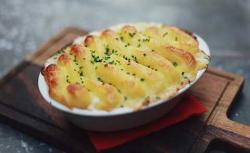 This Sustainable Fish Pie with Sorrel & Petits Pois from The Bel and The Dragon is just that.

Poached in sorrel & bay infused stock until opaque and tender, the strained liquid is then used to make a delicious cream sauce.

The result is heavenly hearty & deliciously rich Ã¢â‚¬â€œ and after baking for 40 minutes in an 180C oven, it will have a gloriously golden top. Sprinkle with chopped chives & serve simply with plenty of steamed vegetables to mop up the sauce.

Peel, finely dice & soften a small onion in a large pan with a little olive oil. Add the fish stock, sorrel stalks & bay leaf then bring to a boil. Dice the fish into large chunks and simmer for five minutes, then lift out with a slotted spoon and cool.

Bring the fish stock to a boil and reduce by half, add 500ml of double cream then strain the sauce & season. Allow the sauce to cool then add the chopped spring onions, sorrel leaves, petits pois & gently fold in the fish. Pour either into a large pie dish or individual ramekins.

Peel and cut the potatoes into even-sized pieces. Cook in boiling salted water for about 15 minutes until soft, then drain and return to the pan over a gentle heat to remove any excess moisture. Using an old-fashioned masher or a potato ricer, thoroughly mash the potatoes. Mix butter, milk, 50ml cream & egg yolk into the mashed potato until soft enough to spread over the fish mixture. Season & pipe or gently fork to cover the fish.

Pre-heat the oven to 180C and bake for 40 minutes until golden & bubbly.