Looking to save money on family feedtime? Sainsbury’s have a solution with a menu in association with top Soho restaurant Quo Vadis.

Sainsbury’s launched its basics range in January 2005, offering a low price point for almost all products, today there are over 550 products in the range, covering everything from tomatoes to toasters. By the end of January 2009, Sainsbury’s will have added an additional 80 new lines to its basics range, from olives to houmous, scotch eggs to sparkling wine and fishcakes to vegetable selection packs. All basics fruit and vegetable lines – apples, lemons, onions and carrots – are the same variety as standard produce; just different shapes and sizes. 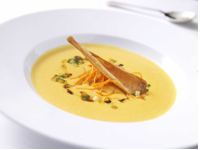 For the chicken stock place a large saucepan with the olive oil over a medium heat. Add the chicken legs and brown for 15 min or until golden brown. Add the half carrot, all of the leeks, onion and thyme and sweat for a further 10 minutes.

Add the white wine and cook off the alcohol for 2 / 3 minutes. Cover the ingredients with water and gently simmer for 30 minutes. Strain the stock through a sieve and reserve.

To create an optional parsnip crisp heat 1 inch of vegetable oil in a small saucepan over a medium heat. Fry 1 slice of parsnip at a time for approximately 1 minute until crisp. Reserve on kitchen towel.

Preheat oven to 200°C. Place sweet potatoes in a roasting tray in the preheated oven for 25 / 30 minutes until soft. Peel and dice the carrots into 2cm cubes and keep to one side.

Scoop out the flesh of the roasted sweet potatoes and discard the skins. Place the sweet potato in a blender gradually adding and chicken stock until it becomes the consistency of soup. Season with salt and freshly ground black pepper to taste.

Sweat the remaining diced carrot in a frying pan with a tbsp of olive oil for 5 / 6 min or until they turn colour. Ensure the soup is hot, serve into bowls, scatter the diced carrot and parsnip crisp on top (optional) and add a drizzle of olive oil. 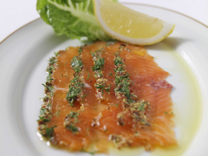 Cover the fillet in a layer of the wholegrain mustard and then a layer of chopped dill. Wrap the fillet as tightly as possible in cling film and return to the fridge for a further 6 hours.

When needed slice the fillet into 1cm strips across the fillet and serve with lemon wedges and a little black pepper. Place a few baby gem leaves and drizzle a little lemon and olive oil over the whole dish. 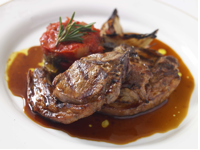 Preheat the oven to 200°C. For the tumbet peel and cut the potato into 2cm rounds. Heat 1 tbsp of olive oil in a large frying pan and fry the potatoes over a medium heat, turning occasionally until golden brown or for 15/20 minutes. Season with salt and pepper and reserve on kitchen towel

Place the red pepper in the same pan with 1 tbsp of olive oil, fry the peppers, turning occasionally for 15/20 minutes until slightly coloured and soft. Reserve the peppers on kitchen towel. Slice the aubergine into 2cm rounds and repeat the same process as above and reserve on kitchen towel.

Peel and finely dice the onion and one clove of garlic. Fry the onion for 5 minutes over a medium heat, then add the garlic and fry for a further 2 minutes. Add the tomatoes and thyme and simmer gently for 25 minutes.

Meanwhile, lightly oil an ovenproof dish. Create one layer of potatoes in the bottom of the dish. Then layer the peppers and aubergines on top. Pour the tomato mixture over the layered vegetables and reserve until needed. Place in the oven for 15 minutes.

Season the cutlets with salt and pepper, heat a griddle pan with 1 tbsp olive oil over a high heat. Cook the cutlets for 2 minutes each side remove from the heat and allow to rest somewhere warm.

Dissolve the stock cube and create ½ pint of stock, having removed the cutlets from the griddle pan add the stock and reduce over a low/medium heat until the required consistency, approximately 5-10 minutes.

Meanwhile blanche the green beans in boiling water for 5 min and cool in cold water and then pat them dry. Heat 1 tbsp olive oil in a frying pan and fry the beans with the remainder of the garlic. Heat through for 2 minutes turning the beans. Season with salt and pepper and serve. 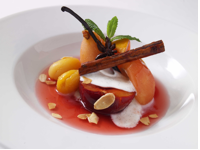 Mix 1 tbsp sugar with the yoghurt and the seeds from the vanilla pod and return the yoghurt to the fridge. In a large saucepan dissolve the remainder of the sugar with 1 litre of water over a medium heat and add the cinnamon stick.

Place the syrup back on the heat and reduce to a quarter or until syrup consistency. Put the fruit back with the syrup, allow to cool, then place in the fridge for 4 hours.

Divide the fruit up between 4 bowls and add a spoonful of vanilla yoghurt to each bowl. Garnish with a cinnamon stick and a sprig of mint (optional).