Spending almost a year in a dark, dank cave is generally not to be recommended. However, it is this long period of hibernation in this unusual environment which is key to making Emmi Kaltbach’s Le Gruyere and Emmental cheese so special.

Experts agree that good cheese is like fine wine. Only careful storage is precisely controlled conditions enable it to develop to gourmet perfection. Emmi Kaltbach cheese is aged in the sandstone caves at Kaltbach where mineralised air remains at a constant 12.5ºC and 94% humidity all year round.

Both Emmi Kaltbach Le Gruyere and Emmental have a distinctive natural and rustic black rind and magnificent tangy taste, which result from the intense maturing process.

Kaltbach Cave-Aged Le Gruyère needs no introduction, it is the UK public’s favourite among the Swiss hard cheeses. Nevertheless a pleasant surprise awaits anyone who tries the full-flavoured but smooth raw-milk classic once it has been aged in the caves for an extended period.

And above all: although it is a hard cheese, the Cave-Aged Le Gruyère has an exquisitely tender consistency. The cheese melts in your mouth straightaway – and unfolds its characteristic rich, spicy flavour on the palate, caressing it with a lingering aftertaste that has no hint of sharpness or saltiness.

Emmi Kaltbach Cave-Aged Cheese is available in specialist cheese shops, delis and delicatessen counters at retailers across the country, including Waitrose. 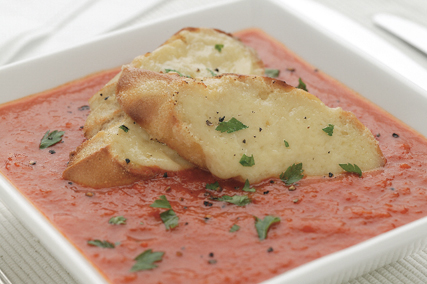 1. First prepare the peppers. Preheat a grill until hot. Place the peppers on a grill rack and cook under the hot grill, turning frequently, until the skins have blackened and charred. Put the peppers into a plastic bag, close the top of the bag and leave the peppers until cool enough to handle. Peel the charred skins off the cooled peppers, and discard the skins, stalk and seeds. Roughly chop the peppers and set aside.

2. Heat the oil in a large pan. Add the onion and garlic and cook gently, stirring occasionally, for about 5 minutes until they have softened. Add the paprika and cook for a further minute. Add the prepared peppers, tomatoes and half the stock, bring to the boil, then reduce the heat and simmer for about 10 minutes.

3. Puree the cooked soup in a blender or food processor, then sieve the soup back into the pan. Add the remaining stock to the pan, plus some salt and pepper to taste. Bring back to the boil and keep hot while you prepare the croutes.

4. Preheat the grill and toast the baguette slices on both sides. Divide the Gruyere between the slices and return to the grill for another minute or so until the cheese is melted and bubbling.

5. Serve the soup in bowls, each topped with two Gruyere croutes and scattered with chopped
parsley.