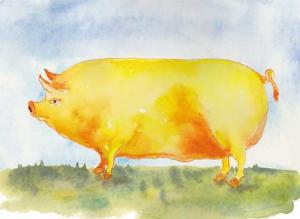 Friday, we celebrated homecomings – our return from Sicily and the return of two other couples from Australia. We were all delighted to be back and decided to share a meal. I offered to bring roasted pork tenderloin and asked if I could cook it in my friend’s oven while we enjoyed appetizers and shared travel stories.

When tenderloins were on sale, I stocked up. I prepared them for roasting by removing the silver skin, a shiny membrane that is attached on one side. I slipped the tip of a sharp paring knife under the silver skin and removed it in long strips. If it is not removed, the silver skin shrinks, becomes tough and makes the tenderloin curl when it is cooked. It took less time to do than to describe and the reward is succulent roast pork without a tough piece of silver skin attached to each slice. I put the trimmed tenderloins into individual re-sealable plastic bags

The next step was the preparation of the marinade. A marinade is a liquid, similar to a salad dressing, used to flavor and tenderize meat. It is a mixture of an acid – citrus juice, vinegar, or wine; an oil – olive, grape seed, or vegetable; flavorings – herbs, spices, citrus zest, flavored oils; something sweet – brown sugar, honey or maple syrup; something spicy – garlic, ginger, chili, mustard, or horseradish; and, something savory – soy sauce, Worcestershire sauce, or fish sauce. A marinade can be as simple as vinegar, oil, salt and pepper or a complex mixture of many flavors. Measurements need not be precise. Generally I use half as much oil as acid, and no more than two tablespoons of sugar or honey for each 240 ml of liquid. Creating a marinade is fun and an opportunity to experiment. I taste as I go and keep notes, the possibilities are endless. I’ve found that it takes about 80 ml of marinade for 500 gr of meat.

I create marinades with combinations of ingredients that suggest particular cuisines. I have used white wine, olive oil, thyme and parsley when I wanted something that tasted French. When I was wishing I were in Morocco, I mixed pomegranate molasses, orange juice, cinnamon and grape seed oil. Vietnam came to mind when I used lemon grass, fish sauce, lime juice and green chilies. The tenderloin I took to the party had been seasoned with a bold, spicy Korean marinade. Here’s how I made it.

The night before the party, I took a tenderloin out of the freezer and put it into the fridge so that it would thaw and absorb the flavors of the marinade.

As soon as we got to our friends’ house, I asked the host to turn on the oven to 220 degrees C. I poured the marinade into a small saucepan, dried the tenderloin with a paper towel and put it into a shallow, ceramic baking dish. After eighteen minutes in the pre-heated oven, the internal temperature of the tenderloin was 60 degrees C. I took it out of the oven and I covered it with foil so that it could rest for five minutes before I sliced it. A five-minute rest allows the juices to be re-absorbed by the meat and results in juicy slices rather than dry ones. To add more flavor I made a sauce with the reserved marinade. I brought it to a boil it in a small saucepan, reduced the heat and simmered it for three minutes before I poured it over the thinly sliced meat.

Pork is one of the leanest cuts of meat, nearly as low in saturated fat as chicken breasts, and its mild flavor means that it can be seasoned to suit your palate and menu. Whenever you marinate meat there are a few important points to keep in mind. The marinade should totally cover the meat. The meat should marinade in the fridge not on the kitchen counter, in a non-metal container, either glass, ceramic, plastic or food grade plastic bags that can be sealed. Marinade that has been in contact with raw meat must be boiled and then simmered for at least three minutes if it is reused as a sauce. Marinating meat tenderizes it and may shorten the cooking time. Use a meat thermometer to determine cooking time. The magic temperature for safe pork is 59 degrees C.

With marinated pork tenderloins waiting in the freezer, it’s easy to pull a celebratory dinner together whatever time zone you’re in.

Carol Egbert lives in Vermont where she paints and cooks. Her food blog can be found at www.carolegbert.com.

By Foodepedia28 May 2010Recipes