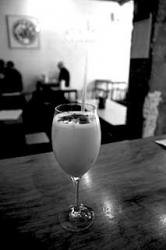 Over on the rather unlovely side of Smithfield Market, the south side, Ask For Janice has been busy creating some Christmas cocktails and, being in the area, we tried the three front-runners. As you do.

‘Berry Christmas’ is a flute of Janice’s own sloe gin, with a rather bittersweet cranberry syrup topped with prosecco and topped off with cranberries and a sprig of rosemary.

This we tried drinking through the rosemary, which rather aptly resembled a portion of Christmas tree. Then after removing the rosemary from our nostrils, we tried again. It wasn’t our favourite, the cranberry being rather acrid rather than astringent we felt, and a pretty small glass for the money. 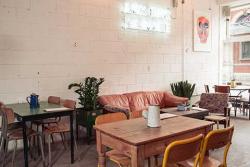 On the other hand the traditionally seasonal Janice Eggnog, made from a whole egg and dusted with nutmeg was really rather good, almost a meal in a glass.

Americans begin knocking back eggnogs from Thanksgiving all the way to Christmas Day, fact fans. It contains egg, duh, which may of course be a concern for the usual suspects. Not being pregnant I drained my own glass cheerfully and could equally cheerfully have had a few more.

Being a child of the’70s, a Snowball has memories for me that linger. I think my parents had the same bottle of Warninks Advocaat in the’drinks cabinet’ at Xmas for at least ten years, mainly because the only person that drank a snowball was granny and my dad had a firm belief that alcohol had no use-by date. The Stones Ginger Wine bottle outlasted him in fact.

Here it’s advocaat, sherry and lemonade served in a rocks glass and gave a real Proustian kick to my memory.

Ask Janice does a great range of wines and light foods too, so all in all well worth parking your sleigh outside for some light refreshment,