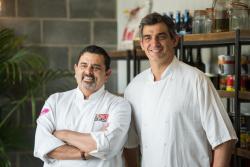 Bruno Loubet and Grain Store – the London restaurant that gives the vegetable equal billing to meat and fish Ã¢â‚¬â€œ are getting ready to host a special Autumnal Feast in collaboration with Cyrus Todiwala OBE on Monday 5th October 2015.

Bombay-born Todiwala is chef patron of CafÃƒÂ© Spice Namaste, the landmark Indian restaurant now celebrating its 20th year. A recognised pioneer of sustainability in the UK and a foremost exponent of buying British, his ethos matches perfectly that of Bruno Loubet and Grain Store.

Tickets for the feast will cost £49 per person and will include a cocktail on arrival and a 4-course feast from these acclaimed chefs.  To book please go to the Autumn Feast EventBrite page.

Grain Store has pioneered the use of vegetables as a hero ingredient since it opened in 2013. Although many dishes do have a meat or fish element, Grain Store’s menu gives vegetables a prominent, if not starring role.

Grain Store will be hosting a series of feasts over the coming year with chefs from around the country – as well as some interesting food producers – cooking with Bruno. Previously, they have hosted dinners with Persian chef Sabrina Ghayour and food producer the Butter Viking.