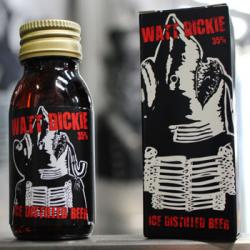 The product information is not enlightening. The meek enquiry,’What is ‘Watt Dickie‘?’ elicits only the response,’good question’. So far, so ambiguous. I know only that this Lilliputian vessel contains a beer-based liquid created by’punk brewers’ BrewDog. It promises neither to change my life or end it Ã¢â‚¬â€œ although, potentially, this elixir could do either, or both. So, like a curious potion-popping Alice, I unscrew the cap and take a sniff. Not a swig. Not yet. I’m no fool.

I am fooled by the aroma, though Ã¢â‚¬â€œ a heady waft of sticky, deep, nectar-like berry fruit and a whack of elderflower. For those with a fondness for certain childhood medicines, it smells like blackcurrant Tixylix. Of which I was a big fan. But a single sip and all that syrupy sweetness is just a memory Ã¢â‚¬â€œ the expected viscosity is there, but delivered by a rush of intense bitterness – followed by more hops that a field-full of one-legged rabbits. It leaves my mouth high and dry, gagging for another nip.

The mysterious’Watt Dickie‘ is the result of an experimental process by BrewDog co-founders James Watt and Martin Dickie, using an IPA-style beer, and is currently awaiting patent approval. The beverage is described as’the offspring of a radical brewing and ice-distillation process’, yielding a potent, 35% ABV liquid currently befuddling drinkers at the Scottish brewery’s 12 UK bars.

Those BrewDog boys have always had a penchant for experimenting with some hefty specimens Ã¢â‚¬â€œ other high-ABV offerings have included’Tactical Nuclear Penguin’,’Sink the Bismarck!’, and’The End of History’ Ã¢â‚¬â€œ which clocks in at a shocking 55% ABV. Perhaps I’d just stick to a swift half with that one, then. But back to the new beverage.’What is ‘Watt Dickie‘?’ Well, I dunno. But I definitely want some more.