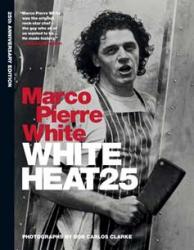 Fortnum & Mason is delighted to announce London’s only book-signing event with Marco Pierre White at its flagship London Piccadilly store onThursday 29 January at 4pm. The celebrated chef will be available on the Lower Ground Floor to sign copies of the special 25th anniversary edition of the classic cookbook, White Heat 25, before its official release in February.

Since it was originally produced in 1990, White Heat has gone on to become one of the most enduring cookbooks of our time.  With its unique blend of outspoken opinion, recipes and dramatic photographs by the late legendary photographer Bob Carlos Clarke, White Heat captures the magic and spirit of Marco Pierre White in the heat of the kitchen.

The 25th anniversary edition, available at Fortnum & Mason, features 64 pages of brand new material, including new recipes, illustrations and reportage from behind the scenes in Marco’s kitchen.