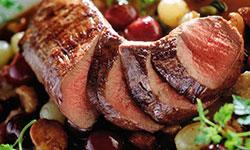 Upscale Marble Arch brasserie Hunter 486 continues to fly the flag for British cuisine by offering a new game dish every week of game season, from November 3 to December 14.

Located within The Arch Hotel London but open to non-guests alike, Hunter 486 has established a solid reputation for modern takes on classic British dishes. The ÃƒÂ  la carte menu will continue to be served during the special period.

The full schedule is as follows: