I’ve got me a Masterkit and I’m damn well going to master the art of this raw chocolate-making malarkey. My casual 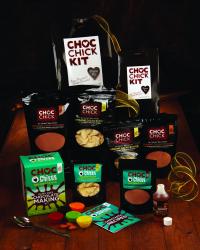 consumption has reached critical levels, and I’m suffering from a nasty little addiction to purchasing astronomically-priced hunks of the righteous brown stuff. My bank balance is ailing, but I’m not ready or willing to go cold turkey.

Although raw chocolate is surely a superior prescription to the old’Mars-a-day’ solution for easing the strains of daily life, it’s also a right pricey remedy that completely eludes the budgetary constraints of the NHS. And I can’t afford a Harley Street doctor. So self-medication is the way… Let’s hope I don’t end up in A&E.

I’m more of a Jamie Oliver bish-bash-bosher than a Heston-esque precisionist, and can occasionally be found watching intricate demos on the Create & Craft shopping channel agog and aghast. How would I ever fashion a hundred tiny petals from fondant when my entire being seems to be made up of fingers and thumbs? The prospect of making my own chocs, then, fills me with mild panic.

Luckily, CHOC Chick‘s Masterkit seems reassuringly straightforward. There’s a big bag of cacao powder Ã¢â‚¬â€œ organic, bien sur; an equal amount of cacao butter; and a squeezy tub of agave nectar. I reckon I could even attempt this without reading through the instructions and recipe book in amongst the accoutrements, but that would probably be Rather Stupid.

So I resist plunging straight in, and let my hand be held. Melt the butter, stir in the powder, sweeten to taste… And that’s it! You can dip straight in, mould it, slab it or dollop it anyway you like it. I’m urged get creative, so in the spirit of Easter I add hot cross bun spices, a handful of dried fruit, and a few crushed biscuits for a bit of 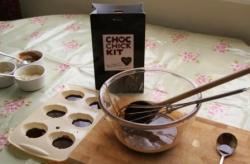 CHOC Chick also offers a wide choice of choc-making accessories, so my nicely spicy mixture makes it into silicone moulds shaped like rabbits and eggs as well as into my mouth, and around it. Raw choc’s always rather melty, so I bung it in the freezer to set up somewhat stiffer. Chilled down, my bounty’s divided amongst cellophane bags and stickered shut.

Only so’s I have a chance of rationing it out, you understand. It may be Easter but I’ve given up sharing for Lent. The remainder of the cacoa powder’s taunting me, though, so I browse the recipe booklet before using it in another seasonally-appropriate treat – intense brownies swirled with almond butter and chunks of marzipan which almost rival Paul A. Young‘s super specimens.

I’m sold. My Masterkit had succeeded in turning me from raw rookie into an at-home raw chocolate master. I can bypass the confectionary aisle at the posh deli, safe in the knowledge I’ve got a freezer full of goodies with which to selectively self-medicate. I’ve fed my addiction, and you may see me on Create and Craft yet, displaying my new-found raw talent.