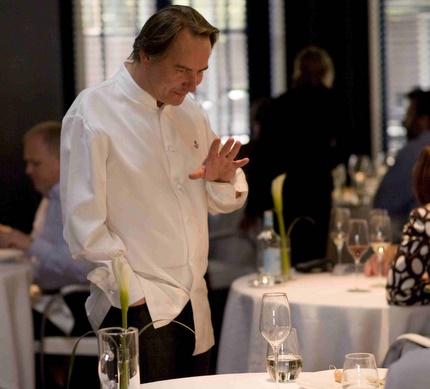 The beginning courses are followed by Veal, Duck and Pork Pie à la Bourgoise. The meal concludes with a selection of sweets and friandises and a cheese course is available for an additional cost. “This menu is representative of the finest Lyonnais seasonal fayre.” Says JC, “Like much of my food, it has its roots firmly in classical cuisine but has been given a contemporary twist.”

This London outpost of his two-Michelin starred l’Auberge de l’Ile in Lyon only opened in July, but in four months, it has built a steady clientele. Jean-Christophe (JC) was recently named Chef of the Year by Lyon Gourmand, a reputable guide in the region. For more than thirty years, this guide has recognised the best in Lyonnais gastronomy but rarely includes a chef. Being named in the guide is wonderful honour. JC joins a stellar line up including Paul Bocuse, Pierre Orsi, and Jean-Paul Lacombe.