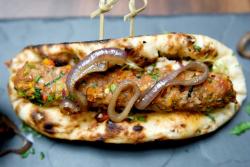 I’m all for street food when in Asia, its natural home. I’m less enamoured of it in the UK. The ingredients aren’t as vibrant or as tasty and the vendors simply aren’t doing the volume of business needed to keep it piping hot and fresh. In the UK we just don’t eat the way they do in the East – frequently – and we don’t have the weather for it.  Nothing takes the edge off a meal like consuming it in the pouring rain, I find.

CInnamon Soho feel a bit the same and seeing the current trend for hand held grub have launched a fresh lamb kebab Ã¢â‚¬â€œ called The Kingly Seekh-Kebab  – spiced with cumin, coriander, ginger and chilli, and wrapped up in naan bread topped with yoghurt, cucumber and mint.

The idea is that you can grab it after a boozy Xmas lunch or on the way home from a session. You can eat it in the restaurant, or take it for an unsteady walk down the road. Unlike the infamous Doner you wont get chili sauce in each ear when you try to bite into it and the bottom won’t fall out a few seconds into consumption.

We popped in for one, as the office is a roti throw away from the restaurant, and found the Kingly to be a bit pricey at £6.75, you’d probably need two to fill up completely, but extremely tasty. The nan is just crispy enough to enjoy but still soft enough to get a firm grip on the lamb kebab inside. The spices were well-balanced but personally I could have done with some more chilli kick. If I’d been drunk, I’d have liked a lot more chilli. Let’s face it, sublety is wasted on a man full of cooking lager.

If you like a bit of street food style, but don’t like the grubby vibe that often goes with it, then the Kingly Seekh-Kebab should be right up your avenue.

Photo sourced from Cinnamon Soho. Your kebab may not look the same. Especially if you’re drunk.