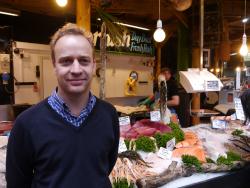 Clearly a gastronome, Blampied-Lane dives recretaionally, for crayfish and scallops in the Marlborough Sounds. While nosing a glass of the Sauvignon, he advised all four teams, including’Kiwi Bluestocking’ (which featured myself) to:’match, rather than contrast the flavours of the wine.’ Aromas included: nettles, green bell peppers and even tropical fruit salad (particularly passion fruit), followed by a fresh, fairly curvaceous, long-lived palate.

At the recently-rejuvenated Borough Market, we were given just 45 minutes to battle through gangs of gawping tourists to uncover ingredients totalling no more than £30 Ã¢â‚¬â€œ a tough challenge given stallholders’ often lofty prices despite apparently reasonable rents. Wisely, Blampied-Lane took sanctuary at a local wine bar, Wine Pantry where he discovered English sparkling wine.

It was soon time to return to the kitchens of city restaurant, Fish Market. There my team would cook’gentrified’ fish and chips.

Instead of pursuing science, like his geneticist father, Blampied-Lane became a winemaker after visiting France as a teenager, later working in Burgundy and Bergerac. 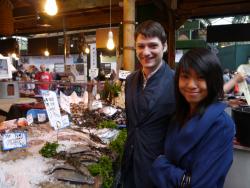 Steam open in broth of Cloudy Bay Sauvignon Blanc and garlic. Sprinkle over opened foil of fish on oval dish and garnish with diced chives.

Peel, section and carve parsnips into thin fries, confer into baking tray, applying a light coat of black truffle/olive oil. Roast until brown and crisp, shaking occasionally for even cooking.

Scallop ceviche £11) and 175ml glass of Cloudy Bay Sauvignon Blanc 2013 (13.50) or bottle (£58) is available throughout October at Fish Market. Sauvignon Blanc is available from Majestic, while sparkling Pelorus and Pinot Noir are available  at New Street Wine shop next-door to the restaurant.