At 5ft nothing, I have no love lost for supermodels – what with their body perfection and legs that are as tall as, wellÃ¢â‚¬Â¦ me. But that was before I discovered that the espresso martini, a cocktail for which I have rather a penchant, is directly thanks to one of these beings.

Apparently, in the 1980s, one of these long-legged creatures walked into a Soho bar and requested a drink that would’wake me up, then f**ck me up’. The bartender was Dick Bradsell and, inspired by the coffee machine alongside him, he decided to add a hit of caffeine to a cocktail Ã¢â‚¬â€œ and the espresso martini was born. Or at least the inception of it called the Vodka Espresso, which was first served on the rocks, then renamed the Espresso Martini when it was served straight up (and which had the moniker of Pharmaceutical Stimulant for a time in the late 1990s when served at Notting Hill’s Pharmacy). 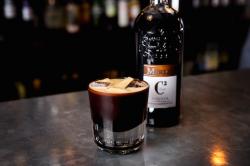 Unlike a nice bottle of wine, which you often simply quaff, I think a cocktail you remember, perhaps because there’s something celebratory about imbibing them Ã¢â‚¬â€œ a drink that conjures up that holiday feeling. My most memorable must be the ice-cold espresso martini enjoyed at lunchtime in Ibiza, in a restaurant that from the sea looked a bit like the Thunderbirds base on Tracy Island. It was much better than any dessert and offered that welcome caffeine hit to counteract the post-meal somnolent slump.

This is rivalled only by the Trac-e-tini, served with a little grating of Valrhona chocolate… Yes, it seems having a drink created for you is not only the prerogative of the rich and famous Ã¢â‚¬â€œ all you actually need is a friend that’s talented with a cocktail shaker Ã¢â‚¬â€œ and the naming of devised cocktails, of course.

Whether you’re lucky enough to have one of those, or even if you don’t, you won’t miss out, as June is Espresso Martini Month at Grind & Co’s  locations across London. In conjunction with Cognac connoisseurs Merlet et Fils , it is combining coffee and cognac in a newly imagined version of this classic cocktail.

Five generations of Merlet, dating back to 1850, have been cognac distillers. Previously supplying merchant houses such as Hennessy, they are now producing under their own name. The Merlet Brothers Blend is a new style, made by Pierre and Luc Merlet, which uses a blend of eau de vie that ranges from around four to ten years in age, with the various vintages bringing different levels of complexity to the overall product. It can be enjoyed simply over ice, but you can try it in the espresso martinis being served at Grind & Co. 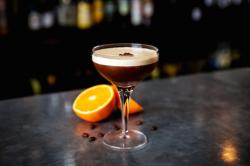 While father Gilles still runs the business, the brothers are the next generation at Merlet, with a new focus Ã¢â‚¬â€œ on that of the cocktail culture. So, as well as cognac distillers, they are also liqueur makers, including the C2 Cassis, C2 Citron and the Merlet C2 CafÃƒÂ© Cognac, which is a blend of cognac, 100% Arabica Brazilian coffee extract and a little sugar.

For each new batch of C2 CafÃƒÂ© Cognac, the coffee is freshly roasted, then ground and infused in hot water within the distillers at Merlet, to which a neutral alcohol is added to stabilise the infusion. Once filtered, the coffee extract is added to a specially blended cognac (that accounts for half of the finished liqueur), which gives a smooth finish alongside the flavours of the coffee, including spices, vanilla and cocoa.

If you’re a coffee lover, you have probably already encountered the offerings of Grind & Co. The first venture Ã¢â‚¬â€œ Shoreditch Grind Ã¢â‚¬â€œ opened in 2011, but now includes Soho Grind, Holborn Grind and London Grind. It was set up when Londoner David Abrahamovitch asked his Australian friend Kaz James (a DJ and coffee lover) to help him turn his father’s mobile phone shop into an espresso bar. And the coffee shop by day, cocktail bar by evening, came into being.

Sam Trevethyen, head of coffee at Soho Grind, explained that they use a blend of Brazilian, Mexican and Guatemalan coffee beans to create the coffee used in the cocktail. This blend, he described, as having notes of praline, caramel and brownies, which complement the Merlet C2 CafÃƒÂ© Cognac, creating an espresso martini that at first delivered a strong taste of coffee, but which then developed a slight sweetness as the flavours developed. But just in case I got that wrong, I took one for the team and ordered a second martini Ã¢â‚¬â€œ just to make sure.

For just £5, you can sample the espresso martini at all of Grind & Co’s branches throughout June (made from Merlet Brothers Blend, Merlet C2 CafÃƒÂ© Cognac, sugar syrup and espresso). And as for whether it will be the drink that serves as a pick-me-up or one that simply floors you, well that might just depend on the quantity you consume!