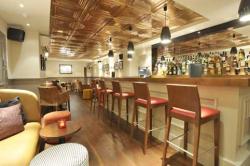 I’ve got five restaurants now,’ says Malcolm John, resplendent in a rather natty double-breasted jacket. ‘Well five and a half if you count this.’

‘This’ is the newly opened jazz bar downstairs at Malcolm’s Fish and Grill Putney outpost. Upstairs the large restaurant space is packed as per usual with happy diners, proof once again of Malcolm’s remarkable ability to create restaurants that people actually want to go to, as opposed to simply tick off from wanted list.

The bar is so new you can still smell freshly-sawn wood but its intimate and cosy. At the far end, two almost horizontally laid-back old blues player are showing how it’s done. ‘I don’t want the music down here to be drowning out conversation, but be behind it,’ Malcolm adds while trying one of his own mini puddings of slow-braised ox cheek. ‘This is good!’ he says, as if surprised by the fact, but as he’s a man who has many years of top-end cheffing behind him it’s unsurprising really.

Chef and now restaurant entrepreneur. His restaurants work because as a boss he has a keen business brain, spotting promising locations that others might pass by, and as a chef he runs tight kitchens to his very high standards. No chef in his employ can pull the wool over his eyes and expect to get away with it.

Like the man said on the Fast Show. ‘ Jazz, niceeeeeeeee’.