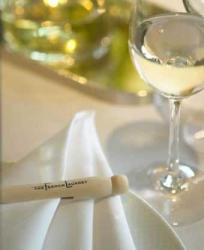 Thomas Keller, he of the famous French Laundry restaurant, is bringing the experience to London for those of us who find the flight to Yountville in Napa Valley, California a bit far

He’s not just bringing his knives, he’s also bringing in some fixtures, fittings, crockery and over a dozen members of staff when he sets up shop in the Georgian Restaurant in Harrods, London sometime at the start of October.

A ‘pop up restaurant (yes, yawn, another) it will be called ‘The French Laundry at Harrods” but we hope the cooking will have a bit more imagination than that. It should do, Keller has a fine reputation at his home restaurant (he lives next door) which he started in 1994 and he has other starred restaurants to his name across the USA, such as the 3 Michelin starred Per Se in New York.

Foodies will be keen to book but the price may put them off a bit – the nine-course tasting menu at lunch and dinner, could be as much as £250 per person. Does that include coffee and water?

As it will only last ten days and the room seats 70, Mr Keller should make a pretty penny out of this venture despite the recession. The rich are always with us, after all.

To get a taste of Thom, you could do worse than check out his book – The French Laundry Cookbook & Ad Hoc at Home. Two books in one sleeve and a snip at £52. If, as the blurb claims, you can recreate The French Laundry at home, maybe you can avoid the cost of a meal at the pop-up