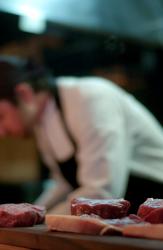 Before the Hawksmoors, the Goodmans and all the rest there was Gaucho, actually first appearing in the Netherlands in 1976 in Amsterdam. A cut above a steakhouse, aimed at people who felt a little declasse in Harvester, this Argentinian temple of meat is rather differerent. Animal hides make up much of the upholstery and the meat in all its various cuts, is paraded around the room raw so you can see what you’re getting. So it isn’t’ the kind of place to take Morrissey for a snack.

Always nicely dark inside, you fall over the furniture a lot until your eyes adjust, it also benefits from an excellent Argentinian wine list. At a time when one rather suspected South America was dumping their inferior wines on the UK, the wine list at Gaucho was and remains a taste of what’sreally available if you know where to look. 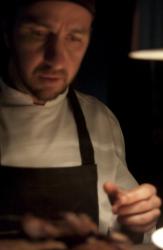 Of course the snobbier foodies never ‘got’ Gaucho, they dismissed it as too downmarket, it wasn’t properly connected to the right people in the right places, and it it was suspected that it might even harbour right wing tendencies, what with it being Argentinean and all. But Gaucho has got on with the task, serving up steaks to the masses and doing a good job of it, Gauchos now litter the pampas of London and remain popular with ordinary everyday folk looking for a reliably decent bit of steak any day of the week. Hearing of a new menu, we herded ourselves into the Swallow Street branch for a look see.

Starters, it has to be said, have never been the greatest thing on the Gaucho menu, even though they were doing ceviche long before it became briefly fashionable. The new menu has Argentine King Prawns, which for some reason conjured up visions of prawns in stetsons, and these come pan fried with black pudding, fresh orange and romesco sauce. There is an affinity between prawns and the black stuff, here the pudding is the softer, crumblier boudin style and not the kind of pudding beloved in the Midlands, and the acidity of the orange and the spike of the romesco sauce made up quite an interesting mouthful. You could call it fusion perhaps but it didn’t seem out of place in a restaurant devoted to steak. 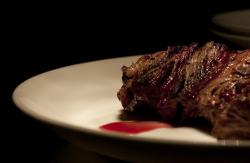 Gaucho does all the cuts of steak of course, but new to the menu is Tapa De Ancho. This is the top of the rib eye and there are only two cuts per cow. It’s marbled with fat, but here’s the clever part, instead of slicing steaks off it like slicing bread, they use knifework to unwrap its full length. This has the effect of creating a ‘sheet’ of steak with the fat that would have been inside now all on one side. 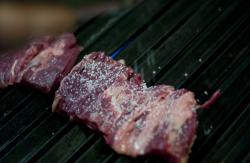 When this hits the grill, the fat sizzles and slowly crisps whereas before, on a rare to medium steak, it would have stayed largely uncooked on the inside. The excess fat drains away on the griddle V bars so that the steak doesn’t ‘stew’ in its own juices.  Now sizzled steak fat is a beautiful thing, especially when the rest of the steak remains rare.

Fernando, Gaucho’s grill chef, uses lots of super hard rock salt to season the meat on the upper side as it cooks because, as he explains, that kind of salt doesn’t immediately become absorbed and encourage moisture loss. It’s also important not to fiddle with the steak, not to poke and prod it about, only turn it over once when the meat is clearly coming away from the bars without sticking. He recommends 70% of the cook time is the first grill, then 30% more after turning it over. Doneness is a matter of experience, but again he recommends you don’t prod the meat more than you have to.

Most of the salt will fall off when the steak is turned, so don’t worry health freaks, while towards the end of the cooking, chimichurri sauce is painted on and a small bowl of it is also served on the plate  The result is a an excellenly flavoured, well-seasoned steak with a happy crunch and superb fat. It was delicious, if anything can wean steak lovers off the expensive, and to my mind less interesting fillet, then this is definitely it. 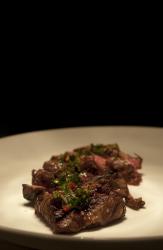 With it we had Black Quinoa Tamal Salteno – a risotto-style quinoa cooked in vegetable stock with carrots, peppers, onions, mushroom and goat’s cheese and it worked okay, but lets be honest, chips are best with steak.

If you havent yet graduated to grown up food, then there is also the new Gaucho Burger – a blend of all four cuts of beef with smoked bacon, Bermondsey Frier cheese, chipotle chutney, roasted onion mayonnaise, brioche bun and chips. A strident and unsubtle flavour bomb designed to deliver all the main basic taste groups that Americans and teenagers demand in one messy mouthful. If you like that sort of thing, then you’ll love this..

We finished with dessert of Salted Dulce De Leche and Macadamia Cheesecake with salted caramel sauce, which all rather stressed the salt bit and I’m not yet convinced by salted caramel, but the wine, a Torrontes Licoroso Parral de los Monjes, was excellent.

If you’re bored with standard steak, the tapa de ancho should give you more than enough reason to get down to Gaucho and try the new menu

By Foodepedia26 May 2013Restaurant News