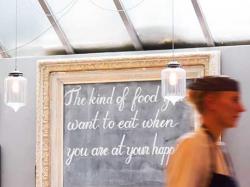 We do a lot of terrible things for charity us liberals; we buy dusters at ten times the going rate from shell suited, fast talking, wide boys at our door, we pretend to find the Big Issue a Good Read and we eat at Jamie’s 15.

Jamie’s 15 was perhaps the worst restaurant I ate in during 2007; the food was rubbish and overpriced, the tables smeared from wipes with filthy rags and the staff indolent and insolent. Jamieland souvenirs were being sold to gullible Americans and out of towners and the champagne socialists of North London were grimly eating as if it was their last’supper’. I didn’t go back and swore I never would, despite the obvious good intentions of the place.

But then a press release arrived saying that all had changed, there had been a design revamp and a bright new chef put in place. Gone was the dodgy Italian menu and in its place a British seasonal one had landed. That, and the fact that the area had changed its demographic since 2007, was enough to lure me back for lunch and a look see.

The City Road hasn’t changed much though, it’s still one of the noisiest, most brain-damaging traffic heavy streets in London, but Old Street tube station has moved on. Purged are the tramps and winos, now young people working in New Media throng through, all dressed the same and sporting self-satisfied expressions that say’I am here, I am in the centre of everything hip. I don’t work at a desk, I work in a space.’

Not many of them in Jamie’s 15 though, but then he’s probably old enough to be their dad, instead the 30 something bosses of those New Media companies fill the tables looking sharp in Gap. There’s an open kitchen at one end with a hunky looking pizza oven, although there appear to be no pizzas on the menu, and the feel is far more attractive than before. The tables and glasses are clean for one thing and the bar looks inviting.

The menu from chef, and mate of Jamie, Jon Rotheram is full of stuff I want to eat, but concise enough not to induce a headache of indecision. Jon’s time at St John is evident but this is not a clone, his own ideas are strong and only the focus on seasonal, simplicity and quality is carried through.

The dishes are for sharing, which is a concept I’m never very happy about being an only child, and it’s not always practical. How do you share a broth? With two straws? Not wanting to re-enact The Lady and the Tramp, we passed on that one.

Asparagus and courgette fiercely roasted in that pizza oven and topped with a gloriously glowing egg, was easier to share once the egg had been burst and stirred through. The’grass was crisp, the egg exemplary but where was the advertised truffle? No sign nor scent of it.

Pink Fir, Lincolnshire Poacher and wild garlic was fill your face gorgeous; Pink Fir, along with Ratte, are the best potatoes in the world for serving simply boiled or steamed  and the gummy, tangy  puddle of cheese clung to each piece tenaciously with the slight whiff of the wild garlic shooting through. We called for bread to mop up every last sticky bit of it.

And then there was Swiss Chard, the hardy beast of the green party, nothing can take it down not even a British winter and this was the first of the new year crop. At this pak-choi sized stage the leaves and stalks can remain wedded in the pan, as they cook at almost the same speed, and the leaves have not yet developed the super-metallic tang they pick up as the season progresses. A small lake of butter meant we deployed more bread and forgot about the cholesterol count.

The Portugese love pork and clams and so do I, there is a love there that is greater than the love between men. 15 makes it British-ish by adding slow braised pig cheek. The fat was gluey in a very good way; it stuck to the teeth like candy floss and was sweet like honey. This suited the clams very well, served in their shells and smugly plumply briny. White beans added extra protein and sucked up some of the surrounding juices and the laver bread, that peculiar Welsh staple, was an interesting cast member, but here it looked good but only really mumbled its part.

And then there were sweetbreads, an excellent foodstuff to freak out Americans I always find. They need a careful hand in the cooking; the sweetbreads, not Americans, and these were done very well. The texture resistant at first then morphing into the requisite creaminess and served with crisp purple sprouting broccoli and new season garlic. Our French waiter looked on approvingly, his smart service a model of only being at table when needed and not to keep pointlessly topping up the water every few minutes.

We were told there was a standard delay of 15 minutes for the Hazelnut madeleines, which would have seriously inconvenienced Proust, but didn’t bother J who elected to wait despite my increasingly itchy feet. When it arrived it didn’t prompt any buried childhood memories in him and when I asked him later what it had tasted like he couldn’t remember that either.  Ah well, so desserts didn’t quite do it.

The main thing is that this visit to Jamie’s 15 erased the bad memory of my first one. The food felt good and was properly priced, and the staff were as professional as can be. As a place for a democratic meal, something for everyone and as a post workstation drink and a nibble it seems to hit all the right notes.

The only shame is that 15 was allowed to be subpar for so long before Jamie realised that even liberals won’t put up with bad food for a good cause for ever.  The good news is that Jamie’s 15 no longer needs a charitable review.

By Foodepedia24 May 2013Restaurant Reviews