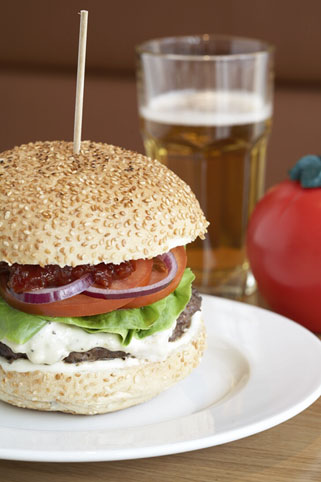 For a while burgers became the bete noire of health experts and other government busy bodies. The B word seemed to sum up all that was wrong with the nation’s health – we had become a nation of burger eaters in thrall to US marketing. Our children were fat and loathsome and sat in front of the TV all day while their teeth slowly dropped out through excess sugar and littered the carpet for yards around. Their parents were immobile slobs, barely able to raise their 5 litre bottle of own brand cola to their lips.

And yet a well made burger is a thing of beauty. Quality meat, charred on the outside, pink in the centre, and wrapped in a decent bun is something to be savored. You can either make it yourself, it’s hardly rocket science, or you can buy from the Gourmet Burger Kitchen.

The Gourmet Burger Kitchen concept originated in New Zealand and came over here in a backpack. Well it didn’t, but the ethos of quality fast food was uniquely NZ. They now have 28 burgers on their menu and 49 stores. That’s not going to get The Clown worried, but it’s certainly impressive in just a few years and their name sets out their philosophy pretty clearly.

Now they’ve invented the lunch burger, spotting the simple truth that while we might toy with the idea of a burger for lunch, a full size one will only induce snoozing on the desk sometime later. These little beauties are, well they are little.

Never ones to turn down a free lunch we happily took delivery of a sample bag at the office. At this point we should perhaps tie ourselves up in moral knots about the propriety of being ‘bribed’ in this way, but we won’t. GBK took a chance – if the burgers and fries had turned out to be crap we would have said so quite happily. Instead we liked them a lot.

The size was right – an easy handful so no one ended up with burger juice on the keyboard. The beef was perfectly cooked and the chips had the look of hand cut, as none were the same size. Little broken bits of chips at the bottom of the bag I always take as a good sign as I tip them into my mouth. Not too salty, but seasoned well. The Puy lentil burger was, of course, not as good as a meat burger but as a compromise for veggies it was pretty effective. It looked tasty, studded with those luxury lentils, and the texture had bite to it. The addition of green curry into the mix of lentil and potato certainly helped the flavour. A chicken burger had tender fillets, cut to strips and coated in a fine mayo.

What had us all scrambling for more though were the dipping sauces for those chunky chips. These were all excellent. The blue cheese one was so good I went hunting for a spoon to get an advantage over the greedy buggers around me, while the sweet chilli sauce with flashes of coriander was another winner.

Also part of the GBK summer menu are the Organic Moroccan Lamb burger and Mushroom Burger which is stuffed with feta, cheddar, pesto, rocket and relish Sounds like a winner to us.

So if you don’t fancy a sandwich from Cold n Wet (you know who we mean) but a normal burger seems a bit OTT, try a bite-sized burger from GBK, the only one that doesn’t come with a topping of self-loathing and a side order of guilt.