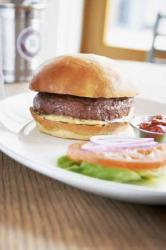 Now I am no burger nutcase, I mean I like a burger now and then just like most people, but I don’t go all weak at the knees or gabble uncontrollably when I hear of another ‘restaurant’ that intends to serve up minced meat in a bun. Maybe it’s my age, when I was a young man burgers were still the food of people who had crude tastebuds and saw food merely as fuel. Americans we tended to call them.

Gourmet Burger Kitchen were not, I think, the first to try and raise up the burger’s image in order that middle-class parents could surrender to their kids peer-fuelled cravings without having the shame of being seen in Maccy D, but they were among the first. Clean wholesome places with no anti-drug lighting in the loos and quality meat on the griddles and sourced from good, traceable places.

Today GBK don’t really figure on the burger foodies’ radar; too chain, too unhip, but they carry on feeding normal people and doing it very well. Getting in the spirit of Jubilee. they’ve partnered up with the Royal Farms in Windsor to create a limited edition burger available for a restricted time only across all GBK restaurants from May 28th.

The Royal Farms in Windsor produce some of the finest beef in the UK and The Windsor is the only burger to be made from The Royal Farm’s world famous Sussex cattle reared in the grounds of Windsor Castle, with the meat then hung and aged to get extra flavour and tenderness.

Only the best grade cattle are selected and the meat is aged on the bone for the maximum allowable time. Each burger is fully traceable and made using a specific blend of chuck steak, short rib and brisket.

The Royal Farm’s beef is in finite supply, one doesn’t want all one’s cows going to the plebs obviously, and so The Windsor won’t be around forever unlike our dear dear Queen. It’s priced at £11.95 and available throughout the Diamond Jubilee and the Olympics until they are all gone.

I tried a preview and it was certainly how I personally like a burger; not too rare in the centre, just blushing slightly, and with the outside pretty well sealed. The brioche bun was naked but for some mustard mayonnaise, and the lettuce and tomato were outside so you had the option of adding it or not. Personally I cannot stand burgers that have everything but the kitchen sink inside them, I want to taste the meat not a hodge podge of ingredients all mashing together in a gloopy mess that goes down my shirt sleeves. The Windsor is much more of a sandwich, simple and unadorned. Mind you I do like a gherkin.

GBK do a nice range of sauces/dips for your chips, although our skinny fries were so anorexic they hadn’t the strengh to survive dipping and we’d have been better off with the thicker options. GBK also serve Coke in original bottles, maybe it’s just me but I think Coke tastes better out of glass and the iconic bottle always makes me smile.

There are GBKs all over London, so if you’re in a royal mood tell the Queen to burger off in the nicest way.

By Foodepedia22 May 2012Restaurant News