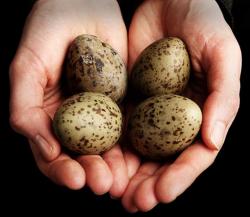 I’d always imagined that gull’s eggs were in some way protected, or a bit special. I have vague, possibly erroneous, memories of a Rutger Hauer film from the 1980s in which he played some sort of heroic park ranger (cops, superheroes etc clearly being out of fashion) who battled evil egg thieves to protect these special ovum. But thankfully gull’s eggs are now not the domain of Rutger and his kind, rather something that can be featured on the menus of forward-looking restaurants such as Boisdale of Bishopsgate.

‘Eccentric Scotsman’ (as it seems obligatory to refer to him) Ranald McDonald has had notable success with his Boisdale restaurants, which are handily located round London in the most wealth-friendly areas, namely the City, Belgravia and his latest opening in Canary Wharf. The fare is modern Scottish, and the prices alternate between the eyebrow-raising a la carte and excellent-value deals that will keep even the canniest purse-pinching Sassenach happy.

However, when we ventured down to Bishopsgate one warm evening, it wasn’t with the primary purpose of trying the famous cigars and whisky, but to sample the special gull’s egg menu, which makes a brief – too brief – appearance from May 3th to May 17th, or when stocks last until. To state my concerns that we were doing something appallingly wrong, I enquired as to the ethics of gull’s egg collection, and learnt numerous interesting facts. Apparently the collection of eggs is regulated extremely closely by DEFRA, and one lucky individual is the only person to have been given a license this year to gather them between 1st April and 15th May. This means that every single gull’s egg that’s eaten in Britain has been picked by the same person, a fairly staggering fact. 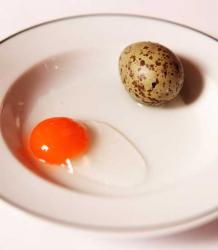 All this, of course, wouldn’t mean a thing if the results were horrible. Thankfully, head chef Neil Churchill’s menu is sufficiently innovative and forward-thinking to mean that those who are normally restrained to duck or hen’s eggs are likely to have an extremely pleasant surprise. The dishes on offer include delights such as scrambled gull’s eggs with Loch Duart smoked salmon and Leek Tarte Fine with a soft-boiled egg, but on our visit we were given a tasting selection of chef’s specialties that showcase both the remarkable versatility of these ingredients, as well as chef’s ability to rustle up a storm.

The first dish that we tried was the simplest, a soft-boiled egg with celery salt and miniature toast. As anyone who’s ever tried a quail’s egg will know, the trick with celery salt is not to have too much to overwhelm the flavours and taste of the egg. Thankfully, this selection is just the right amount, allowing the rich, complex sensation of the egg to come through. It’s richer and more overpowering than normal eggs, possibly surprisingly so, but with a complexity and depth of taste that makes for an intriguing experience.

The second dish was a variation on a Boisdale main menu favourite, a Stornoway black pudding Scotch gull egg. Upmarket Scotch eggs have become very much in vogue lately – witness their apparent ubiquity on gastropub bar snack menus – but this is something else. The crispy, crunchy taste of the breadcrumbs works perfectly with the richness and fattiness of the black pudding, which is then complimented by the egg itself, with the dark yellow yolk oozing succulently out over it.

The third plate was something rather more complex, being a poached gull egg with a leek vinaigrette, tomato chutney, anchovies and capers. Of the four dishes that we tried, this was probably our least favourite; my companion has a long-standing aversion to leeks and I wasn’t entirely sure that the anchovies and capers really added anything to the taste. However the tomato chutney was divine – light and quite punchy, like a very superior ketchup – and poaching the egg made it taste subtly but pleasantly distinct.

The final thing that we sampled was a unique combination of the decadent and the banal, if that’s not too dismissive a word. The gull egg was presented with a kind of upmarket hash brown (the banal part) in a nest made up of black truffle and salmon. The potentially disastrous overload of flavours in fact coalesced rather wonderfully into something innovative, fun and delicious. All these delights were washed down with a well-chosen glass of Muscadet, perfectly complimenting the food.

So, if you wanted to try something forward-thinking and exciting, and to be the envy of your friends, hie thee down to Bishopsgate. Don’t walk. Run. Otherwise the eggs will be a distant memory, until next year, at least.

By Foodepedia12 May 2011Restaurant News