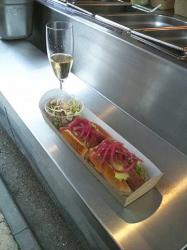 Stefan Nicolaou relishes StreetKitchen’s gourmet spin on the hot dog at The Miller in Bermondsey.

Whilst StreetKitchen is a roaming’take-away’ van that creates delectable dinners, The Miller pub is tucked away behind Guy Hospital, London Bridge and, aside from the bathroom covered in Marvel stickers, is not particularly remarkable. The two have united to add a lashing of flair to the latter and the result is an indulgent hot dog menu to be introduced alongside a superb range of ales and ciders. Neither of those perhaps sounds like the most obvious accompaniments for van-cooked treats, but these are pedigree dogs in a kingdom of mutts.

Each of the three variants builds an individual combination of unusual dressings and treated slaws. The pork sausage of the Basque Hound is topped with jalapenos, mustard and the genius creation of a spicy Chorizo Salsa. The Boston Hound similarly doubles up the meat with a generous portion of braised pork belly shavings; the Boston is layered with red cabbage slaw and celeriac remoulade. For the staunch traditionalists the American Pitbull is a more familiar ketchup, mustard, onion and gherkin grouping. There are some welcome tweaks: the cucumber for the gherkin has been pickled with an aromatic dill, and the onions have been given a treatment of red wine.

The hot dogs are adroitly put together with the precision of a clock mechanism. Adding to the fastidious creations was a slaw of Radish, fennel and basil, which was almost good enough to be eaten alone.

All the ales on the new menu are brewed locally in Bermondsey by Partizan Brewing. The Pale Ale (Galaxy) is a flavoursome stout, heavy and rich with a dark-chocolate aroma. For the light-ale lover the IPA (Citra) is not overpoweringly fruity, with the’Mild’ is a hoppy composition resting somewhere in between.

Broom Farm, Ross on Wye is the stand out addition to The Miller menu. Adding an even bigger draw for patrons, the four ciders have been created especially for the pub. All the dry ciders are brewed with complimentary flavours so they can be mixed into preferred concoctions. The Kingston Black is a razor-sharp apple cider that balances the mellow and tame apples that make up the Sweet Coppin cider.  The Yarlington Mill is an acquired taste brewed using an apple variety that has been cultivated since the 19th century. Another old slogger, the Bath Beauty is a contrasting dessert cider made with soft apples. For best mixing results, opposites attract.

And speaking of partnerships, the StreetKitchen and Miller collaboration is a smart move for the latter. The Hot Dogs are fresh, filling and indulgent, which creates a good match for the distinct additions to the drinks menu. Both food and drink give ample reasons to tread the backstreets between Bermondsey and Borough High Streets to the now-notable Miller pub.

The Hot Dog menu will be available at The Miller from Friday 17 May.