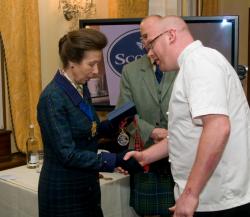 The appointment was made in the presence of Her Royal Highness The Princess Royal at an event which included a demonstration of Scotch Lamb butchery skills. Hulstone will be among four ambassadors selected to represent Scotch Beef and Lamb throughout the UK and Europe.

Princess Anne, President of the Scotch Beef Club and Master of the Worshipful Company of Butchers, presented the awards at Butchers Hall in the City of London. Hulstone, one of Britain’s top competition chefs, will be continuing the royal theme at his restaurant, The Elephant in Torquay, with a tasting menu inspired by royal weddings dating back to Queen Victoria’s marriage to Prince Albert in 1840, in celebration of Prince William’s marriage to Kate Middleton on April 29th.

Diners will enjoy dishes such as Consommé a la Windsor, Fillet of brill in lobster sauce, Beef Mascotte, artichokes, truffle potatoes and a Prune and Armagnac ice-cream created in honour of the soon-to-be married couple. Keep reading for the full menu. Hulstone told Foodepedia: ‘The Bocuse d’Or was a fantastic experience but I’m now looking forward to spending more time in the kitchen and creating new dishes for our restaurant menu. We have a great team here and some very loyal customers but we want to raise the bar further and appeal to those who haven’t tried us before. Being a Royalist, the Wedding menu is something that I’m personally very excited about.’

The Royalist continued: ‘In summer, Torbay really lives up to its ‘English Riviera’ title and we’re lucky to have one of the best views of the bay from our brasserie and restaurant. We have some interesting developments taking place on the seafront which include culinary events at the local Geopark. Our aim for this year is to put Torquay on the culinary map!’

Hulstone’s Royal Wedding Menu will be served at a Gala Black Tie dinner on Sunday, May 1st, places are limited so please book early. It will also be available as a tasting menu in The Room from Friday, April 29th to Saturday, May 7th. Tables are available from 7.15pm – 8.00pm. This very special menu is priced at £105 per person for six courses and wine matching. To reserve a table please contact The Elephant on: 01803 200 04