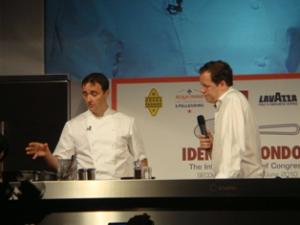 Identita London, described as The International Chef Congress, hit Vinopolis earlier this month. As many of you will know, Vinopolis is situated in several of the arches that support the rail link between London Bridge and the other London Rail termini that are served principally by trains to and from the south east. This sprawling, almost cave like structure is very much a temple to wine as well as other booze, so a very homely place indeed.

Identita London brought 16 of the world’s premiere and renowned chefs together in one place to share some of their secrets and techniques with their colleagues and attendees interested in food. Now, this two day event could be a bit of a marathon, so aware of this possibility I arrived on the first morning when three of the four chefs I had most wanted to see were demonstrating the creation of some of their dishes.

First off the blocks was Jason Atherton who recently split from his role of Chef Patron of Gordon Ramsay’s Maze with a view to opening his own restaurant, which he told us would have 58 covers, would be sited in Mayfair and is scheduled to open in October this year. His intention is that the restaurant will focus on contemporary British cuisine, delivering quality with value for money, where possible sourcing British ingredients. He demonstrated two of his dishes for the audience, roast, poached langoustine with sea vegetables and Cumbrian lamb (pink cutlets, braised shoulder and devilled kidney) with potatoes and ‘edible soil’. Sadly, we didn’t get to taste either of these, but I can say that they looked lovely and had Tom Parker-Bowls lost in superlatives.

We moved on to a demonstration by Italian chef Gennaro Esposito who talked long and lovingly about pasta and how to cook it, and preparing before our eyes a vegetarian pasta dish, that again looked very attractive. Then came the chef that I had particularly wanted to see, Ashley Palmer-Watt, the executive chef at the Fat Duck group, who will be heading up the team at Dinner by Heston Blumenthal, which is set to open at the Mandarin Oriental Hotel in December this year. He said the menu will be inspired from simple historical dishes and will be very different from The Fat Duck. In a quick slide show presentation he showed us pictures of some of those dishes including turkey and bone marrow sausage, ragoo (sic) of pigs ears on toast, pigeon with truffles and lettuce, taffaty (apple) tart and beef royale.

He then went on to show us how the famous ‘meat fruits’ are made. The process is in effect a rather simple one; having made a chicken liver and foie gras parfait, this is formed into a ball shape wrapped in cling film and frozen with a lollipop stick poked into the centre. Once frozen the ball is dunked three times, over a shortish period of time, into a room temperature mandarin jelly, that was relatively near setting point. It is then left to set and thaw in the fridge overnight before being dressed with mandarin leaves and served on a platter of real fruits. Ashley then prepared the beef royale; this is made by gently poaching well marbled steak in a water bath for several hours. It is then finished off in a skillet, searing the outsides before being dressed with an array of ingredients cooked together, including veal tongue, anchovy, gherkin, bone marrow, smoked onion and herbs with claret jus, which is then scattered/drizzled over the steak. It looks a mightily impressive dish and as with the others shown to us, reflected the unique Heston Blumenthal stable influence.

The last of the chefs that I watched in demonstration was Heinz Beck, who was espousing the nutritional values of foods and using methods of preparation that retained the as much of the food’s nutrients as possible. His first dish was an intricate vegetarian soup using ‘liquid cheese’ which was poured into a dish that had been painted with an emulsion made from dehydrated carrot which had been filled with a range of vegetables, avocado, quinoa and leaves. It was a pretty complex creation, but we were told by Tom that is was excellent. For his second dish Heinz cooked spaghetti, initially blanching it for about 4 minutes in plain water, then transferring it into a pan with tomato water – the clear liquid you get if you liquidize tomatoes and allow the solids to settle or, conversely, strain them through muslin – this, apparently, gives the spaghetti an intense tomato flavour, yet the dish, which is completed by the addition of sea truffles (or clams, as in this case) basil, parsley and the clam water, has no visible sign of tomato in it – another dish that had Tom P-B stumbling for superlatives.

The lunch break then arrived and I took in and tasted many of the different Italian produce that was available to sample in the adjoining space. The theme was ‘slow food’ and I tasted such creations as potted grey rabbit that was preserved in olive oil, which actually I found a little chewy; a fava been puree which was lovely; some great al dente pasta in a meat and tomato sauce and some excellent tortellini. These were all dishes created from products that have been given a fresh lease of life having been close to falling into disuse. I also tasted some excellent prosciutto and parmesan while I was there and sampled a few very nice Italian wines – naturally!

Whilst this was an interesting entertaining event, I felt that sitting through another day and a half of demonstrations, even though they were by eminent chefs, would be overkill. I left after grazing through the offerings of the various stalls having had a good morning, thinking that I would definitely attend next year.