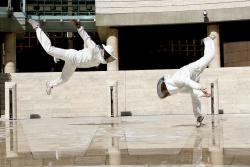 To celebrate the launch of Jim Beam Honey, Londoners are being urged to swarm (this is the only pun I promise) to a giant beehive in Central London to be one of the first to try this brand new bourbon whiskey. Jim Beam Honey is made with four-year old Jim Beam bourbon whiskey slowly infused with real golden honey.

This homage to the honey bee will pop up in Broadgate Circle, London, on Thursday 26 April and Friday 27 April from 6.00pm – 9.00pm giving everyone a chance to step inside and surprised by what’s in store.Hopefully there aren’t too many real bees buzing around. Entry to the bar is free with two complimentary drinks per person.