Dalston street food venture Night Tales ends on Saturday night, after a successful run. Marcus goes along to see what the fuss has been about, and to see whether it’s worth a last-minute visit. 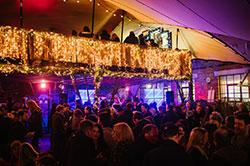 It’s surprising how many of my Central and West London friends quickly reject the thought of going to East London. It’s got to the point of annoying me. Yeah, OK, I can understand the common perception that a rah-rah is going to be out of place if they cross the border into the tight-fitting trouser world of the East, but seriously, what on Earth is your problem?

East London is not a dangerous world full of muggers and judgemental people. Unfortunately, in today’s world, that’s effectively the description of anywhere. Yeah, some parts are deemed’nicer’ than others, but take the blinkers off and talk to people on an honest reality level. My home town of Solihull recently got voted best place to live in the UK. Personally, I think that’s a load of bull and I’ve seen people get into fights, heard about people being mugged there and seen idiots turn their nose up at others purely on face-valueÃ¢â‚¬Â¦ So, effectively, we all live in squalor.

Night Tales is in Dalston and it’s a very trendy installation in Abbot Street Car Park, a minute’s walk from Dalston Junction. You’ve got added little bonuses at the event such as an art exhibition in an underground abandoned bunker, some surprise appearances by established DJs and a Mezcal Mezzanine. We’re more interested in the food though, right?

Have no fear, street food is here! Or, well, it’s at the event and it’s bloody marvellous. One of the DJs, a Mr Seth Troxler, has not only rocked up with his DJ set but also his street food business, Smokey Tails, which serves some really good ribs and pulled pork. I understand it’s a bit samey at the moment, everyone seems to be pushing Americana, but Smokey Tails is one of the better brands that is passionate about the food rather than cashing in on a current trend.

If you’d like a burger, Patty and Bun are in attendance and have some outstanding offerings for you to munch. I’d heard about Patty and Bun for a while after debating the best London burger with a friend of mine. Chuffed that I’ve now tried their stuff, but my opinion on who’s the best will be saved for another article.

Too much meat? Well, first of all, you’re a nutter. Second of all, if you want something a bit sweeter then try Le Petit Paris, whose macaroons are undoubtedly some of the best I’ve tried. The coffee ones are amazing, in fact, they’re so amazing that my new friend made me eat hers just to experience how good they are twice-over, then punched me playfully in the face. They’re that good. They make you crazy.

The Far East world is in the house too, with Taiwanese BAO setting up their purpose built six-seater bar and serving the most incredible steamed pork buns and soya milk fried chicken. You’ve got to try the pork buns; they’re out of this world. Rainbo have a Japanese-twist on some of their dishes, their van is awesome, and the other dishes have some further fusion concepts.

There are just two days left to give it a shot. If you’re looking for a fun night out, try it. I went, I took a friend, we both had a great night, met some new friends and ate some brilliant food. Go for the cosy wonderland that’s been artistically created, stay for some amazing food and conversations.