Spreadable beer? How queer. And, indeed, it’s made me feel a bit off… Mostly because I wanted to really, really love this 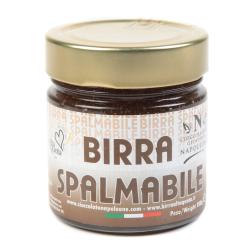 quirky little eccentricity, and it’s left me as cold as a well-chilled Corona. Happily, others are rather more enamoured, and there are soon significant inroads into both jars. My culinary compatriots are obviously equally as fond of blondes as brunettes, because their depletion level is neck-and-neck.

I like the texture Ã¢â‚¬â€œ the spreadable beer has a strange and most pleasant, slightly sticky, Vaseline-smoothness. I like the smell Ã¢â‚¬â€œ the pale version like a happy, hoppy shandy; its dark double more malt and mystique. I like the taste Ã¢â‚¬â€œ a true, if too subtle, beer flavour… At least initially, until a pronounced lingering bitterness puckers my palate. I just wanted something more. It’s a clever concept that’s oh-so-almost there.

And when it gets there, it’s a concept – and a product Ã¢â‚¬â€œ I’ll buy into again. Currently more curio than cracking eat,’Birra Spalmabile‘ nonetheless has great potential as a fantastic friend to fromage; a companion to cold cuts; or even a toast topping – a sexed-up take on the sweet savoury slipperiness of the malt extract that’s the deeply untrendy preserve of the’wholefood-worthies’. It certainly ticks’queer’. It just needs to be every bit as much’beer’.

The product is the result of a collaboration between two Lazio fellows; Pietro Napoleone, an Italian chocolatier; and the Alta Quota brewery’s Claudio Lorenzini. The innovation was the first success story in the creation of a non-liquid beer, debuted at last year’s Salone del Gusto in Turin. Both light and dark spreads are almost half ale, with the remaining proportion Ã¢â‚¬â€œ syrups and gelling agents Ã¢â‚¬â€œ providing the voluptuous body of the gooey paste.

I want spreadable beer to be big. It’s like the ugly duckling friend you just know will be a real beaut once they ditch the dandruff and shed the spare tyre. A couple of recipe tweaks and I’m confident this pair will come out swinging, loudly proclaiming’We’re here! We’re beer! Get used to it!’. I’m sure, in time, I will. Actually, perhaps I should sample another spoonful just to be sure…

Ã¢â‚¬ËœBirra Spalmabile’ spreadable beer is available in Greta (blonde) and Omid (dark) varieties from Selfridges, priced £7.99 for a 280g jar.

For more information on the chocolaterie and brewery behind the product, visit www.cioccolatonapoleone.com and www.birraaltaquota.it